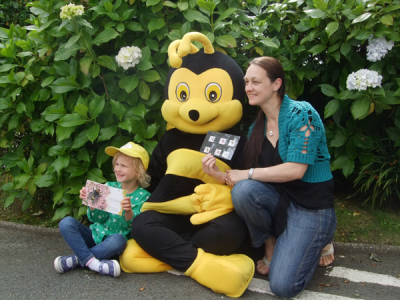 The Isle of Man Post Office is pleased to present this beautiful stamp issue dedicated to one of our most popular and beloved insects and recognising its crucial role in the life cycle of the natural world.

Apart from the honeybee, the Isle of Man is home to approximately 15 species of bumblebee and 57 species of solitary bee. To put this into perspective, currently there are known to be 24 species of bumblebees and over 200 solitary bee species recorded from the British Isles. On the Island these bees can be found foraging from flowers on our mountain moorlands where the lovely Bilberry Bumblebee, amongst several other bee species, can be found visiting bilberry and heather flowers, right down to the Island's coastal fringes where a number of bees make a living on the Ayres and the soft cliffs of Ramsey Bay for example.

Most of us will be familiar with some of the various species of bumblebees that visit our garden flower beds, but the solitary bees will be less familiar and it may be only when they are nesting in our lawns or flower beds that we may notice them. They are called solitary because, unlike the honey and bumble bees, there is no worker caste and they do not live in colonies although they can form large nesting aggregations such as those of Colletes succinctus. Other solitary bees, known as cuckoo bees, forgo the labour of building and provisioning their own nests but sneak their eggs into the nests of other bees and where they develop and eliminate their competition for the nest's provisions. The silver and white Epeolus variegatus is one such cuckoo bee which can be found on the Ayres where it takes advantage of the efforts of bees such as species of the genus Colletes.

On the Isle of Man there are in the region of 120 beekeepers with varying numbers of colonies, 100 of them are fully paid-up Members of the IOM Beekeepers Federation affiliated to the BBKA, comprising of three districts. It is estimated that there are at least 400 colonies kept by these beekeepers or the Bumblebee Conservation Trust. These images are so life-like you can almost smell the honey as this issue is made extra special printed on honey-scented paper.

Please visit our website here to find out more about the Bee Fauna of the Isle of Man collection of stamps and products and to pre-order.