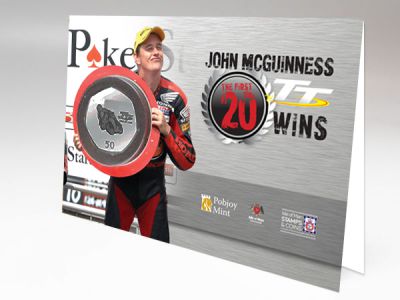 Isle of Man Stamps and Coins and Isle of Man Treasury are delighted to present a new addition to the Manx mint in the form of a special edition John McGuinness 50p coin.

The 50p coin, struck in cupro nickel, features a detailed snapshot of John on his bike in action. Set in sharp contrast to a plain polished background, it is the latest addition to the John McGuinness First 20 TT Wins collection. The coin celebrates the incredible achievements of the Morecambe Missile who secured his first victory around the TT mountain course in 1999, and then in 2013 took the chequered flag to claim his 20th TT win!

The coin can be purchased in one of three ways – individually in a wallet, specially gift packed or as part of the Special Folder of which is limited to 1000 editions. The Special Folder in addition to the smiler sheet and coin also contains an autographed and postmarked special cover as well as a wealth of photos and a full story about McGuinness's First 20 Wins.

Philip Braidwood BEng MLC, Member of Treasury said: "We are delighted with the new John McGuinness coin it was always going to be difficult to capture the excitement and spectacle of a John McGuinness TT race; however I think we have achieved exactly that with our newly issued coin which would make a fantastic addition to any collection of a TT fan."

The coin and other products in John McGuinness First 20 TT Wins collection can be purchased - online at IOMstamps.com, Douglas Postal Headquarters Customer Services Suite, Ramsey Post Office, Regent Street Post Shop and at the TT Grandstand during the TT fortnight.