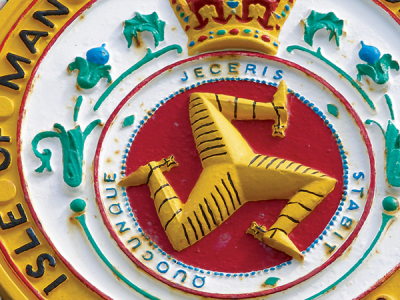 New stamps being issued tomorrow (April 3) feature the most recognised symbol on the Isle of Man – the Three Legs of Man.

This national emblem can be seen everywhere on the Island from buildings and monuments to chocolate bars and tattoos. But what is the origin of this unusual emblem, Isle of Man Post Office reveals all. For upwards of a thousand years and probably more, the Three Legs of Man has been the symbol of Manxness yet the origin remains uncertain. In Ireland, stylistic spiral three legs were carved in stone in Neolithic times.

Throughout the world the mythology of threes has played a significant role, notably in India, China, Korea, ancient Greece and Rome – and among native North Americans. It should not be surprising therefore to note that the Manx Parliament consists of three divisions – the House of Keys, Legislative Council and Tynwald. Nor the fact that the ancient open-air Tynwald ceremony at St John's used to occur to greet the rising sun on Midsummer's Day.

The three-legged symbol, which indicated rotary movement, was regarded as representing the three-spoked wheel of the sun god's chariot as it crossed the sky. The Three Legs of Man is often known as the triskele and throughout the Island it can be found in a variety of places however not always consistently the same. Some turn correctly to the right, others the left; some kneel as if acknowledging the supremacy of nearby England or Scotland and some are on tip toe, implying fleetness of foot.

A Latin motto accompanies the Island's Three Legs of Man 'Quocunque Jeceris Stabit' which emphasises the Island's resilience. Translations have varied – Wheresoever you cast it, it will find its feet or Whithersoever you throw it, it will stand, but the meaning has remained clear: no matter how 'storm-tossed' the Island might be, it can survive.

Look out for a competition coming very soon on the Isle of Man Stamps & Coins Facebook page where you can take part in a quiz to try and identify the locations of the Three Legs of Man emblems which feature on the new stamps. The winner will receive a bumper gift pack of this colourful issue.