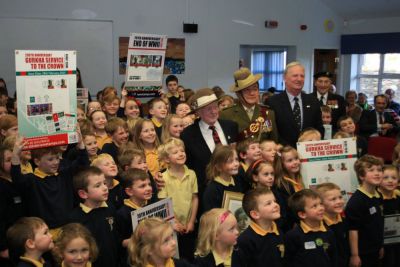 On February 26, Isle of Man Post Office, in conjunction with the Pahar Trust Nepal and Kirk Michael Primary School, held an event at the school to recognise the achievements of the Pahar Trust Nepal, ahead of the opening of its 30th Isle of Man funded school in Nepal and to celebrate the 200th Anniversary of the Queens Gurkhas Regiments whose members continue to support the Trust's activities. In attendance were the Trustees, one of whom was retired Queens Regiment Gurkha, Major Dhan Chand, the school children and others linked with the Trust including artist and veteran James Fenton and Trust Chairman, Howard Green.

The Island based charity Pahar Trust Nepal was established in 1993 by two ex-servicemen of the Queens Gurkha Engineers, Mr Tom Langridge MBE and Mr Chandra Bahardur Gurung. Howard Green subsequently also became a Trustee and Chairman. The Trust raises funds to build schools in remote regions of Nepal. In addition to this, money is raised to train teachers and provide educational resources, ultimately giving children an opportunity to have a good education in a safe, secure learning environment. To date 30 projects have been exclusively funded from the Isle of Man, the majority of which are schools.

The afternoon began with a warm welcome from Head Teacher of Michael School, Tony Robinson.

Following this, Howard Green gave a background to the Pahar Trust Nepal, its projects, objectives and what it has achieved to date.

Maxine Cannon General Manager of Isle of Man Stamps and Coins then spoke about the Post Office's connections to the Trust, and the Penny Black - the first ever stamp, before telling the audience about James Fenton and his forgotten Army story, a book which consists of a total of 440 letters which were sent home to his parents during his military service in the Second World War.

Maxine Cannon General Manager of Isle of Man Stamps and Coins said: " If no one had created the postal system we would not be in the position we are today to celebrate the work of Pahar Trust, which is deeply rooted in Kirk Michael where there is a strong sense of community. We wouldn't have been able to do our special cover either."

She then addressed the children and said: "With the spirit of 1840 we would like you to send a letter to anyone to experience what James' mother and father had and what the first person in 1840 experienced in getting a letter." Following the event, 111 postcards and stamps were given to the children to send to an address of their choice.

Major Dhan Chand, Queen's Gurkha Engineers (retd) and Pahar Trust Trustee, then addressed the audience. He spoke about his childhood in Nepal, about the Pahar Trust projects and the 200 years of Gurkhas.

James Fenton was then introduced. James presented Tony Robinson Head Teacher of Michael School with his original Gurkha painting, an image used in the Isle of Man Post Office's latest stamp issue '70th Anniversary of VE/VJ Day' which was also launched that day. James then spoke about the army, military equipment and memorabilia. He presented the Pahar Trust with a cheque which were the royalties he received from the special cover. They will be used to help rebuild a school in Nepal after it collapsed following an earthquake.

Finally, the children and other attendees joined together to sing a song written about the school.

Howard Green, Chairman of The Pahar Trust Nepal commented on the event, he said: "The Pahar Trust Nepal is extremely grateful to the Isle of Man Post Office for all the interest and support it has shown. Having a special cover is a great privilege and it helps us to celebrate completing our 30th Isle of Man funded project in Nepal. I am confident that there will be a great deal of interest in the stamps and covers. This will help to promote the work of the Pahar Trust Nepal. Thank you to all concerned."

Image of Michael School children with James Fenton, Dhan Chand and Howard Green at the event