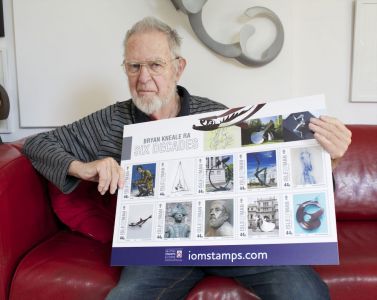 To view the stamp collection here

Isle of Man Post Office has released a collection of ten stamps showcasing the remarkably varied works of the Isle of Man's most distinguished living artist, Bryan Kneale RA. The stamps, which mark over 60 years of exemplary artistic practice and achievement, feature Kneale's work both on and off Island.

Bryan Kneale RA is an elder statesman not only of British sculpture but also of Manx art. He is known in London as a celebrated sculptor, Royal Academician and esteemed lecturer whilst he has contributed to Manx cultural life through a range of public commissions sited here on the Isle of Man.

The examples of Kneale's work featured on this stamp issue include the large bronze '3 Legs of Man', a sight now familiar to those who pass through the Island's airport; the 'Deemster Fish' inside the Isle of Man Courthouse building and 'Horse', part of the Tate Gallery collection, London. The stamps also incorporate an ingenious selective over-layered metallic printing technique, adding gleam and lustre to the set.

Born in Douglas, Isle of Man, Bryan Kneale RA studied painting at the Douglas School of Art, graduating in 1947, he then moved to London where he studied at the Royal Academy Schools. During this time he won the Rome Prize and spent some time living in Italy. Kneale became known as an accomplished portrait painter until, in the 1950s, he was inspired by his brother-in-law to try welding and he moved from painting to making sculpture. In the early 1960s he became a lecturer and taught at a number of highly respected colleges including the Royal Academy of Art, before retiring in 1995.

Kneale has exhibited widely and his work can be found in many prestigious collections around the world, including The Tate in London, the Museum of Modern Art in New York and, of course, Manx National Heritage on the Isle of Man.

Commenting on the stamp issue, Bryan Kneale said: "I would like to say how lucky I was to have been born a Manxman, the Island has been a lifelong inspiration to me as an artist. I am very pleased to see my work featured on Isle of Man stamps, I feel honoured."

Paul Ford, Stamp Issue Coordinator of Isle of Man Stamps & Coins said: "Although it can only provide a small insight into over sixty years of the artist's commitment and endeavour, I sincerely hope, as an introduction to some, that this stamp issue prompts further interest in Bryan's work and sculpture in general. We are very grateful for his kind collaboration."

To view the stamp collection here