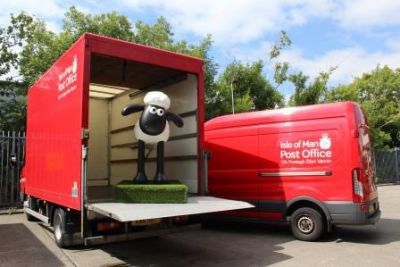 Representatives from the Isle of Man Post Office's Stamps & Coins team will next week exhibit at this years 'Royal Manx Agricultural Show' which is being held 12-13 August at Knockaloe Farm, Patrick, where it will officially unveil its latest stamp collection celebrating the 40th anniversary of the Academy Award®-winning studio Aardman.

The Isle of Man Post Office will be situated on a stand at the show with the Manx NFU's Isle of Man Agricultural Benevolent Trust which will be at the centre of a maze containing live sheep and a five foot Shaun the Sheep against a Mossy Bottom Farm backdrop. The Post Office will have its Aardman collectables for sale and there will be fun and games for all the family at the stand, including a competition in which one lucky family could win tickets to a special screening at the Villa Marina of a 'A Close Shave' and 'A Grand Day Out, and for £1 a child can stick a stamp on the giant Shaun the Sheep. All proceeds for the stamp sticking will be donated to Wallace & Gromit's Children's Charity and the Manx NFU's Isle of Man Agricultural Benevolent Trust.

The exciting range of collectables titled 'Celebrating 40 years of Creativity' which is to be uncovered on the first day (August 12) of the show includes a special collection of stamps, featuring a variety of Aardman's most loved animated characters, whilst commemorating six iconic onscreen moments hand-picked by Aardman's creative team. The collection stars family favourites: Wallace & Gromit, Shaun the Sheep, Morph, Timmy, and Trixie and Cuddlepuss of Creature Comforts fame. As a part of the celebration, two additional stamps have been created of Morph on a visit to the Isle of Man to complete the eight-piece set.
In addition to the eight-piece set, the Isle of Man Post Office has a range of Aardman gifts available, including limited edition prints signed by Co-Founder of Aardman Peter Lord.

Maxine Cannon, Isle of Man Stamps and Coins General Manager said: "Isle of Man Post Office is looking forward to officially launching its nostalgic collection of Aardman stamps celebrating '40 Years of Creativity' from the studio on day one of the 'Royal Manx Agricultural Show' and our Shaun the Sheep who recently arrived on Island and who will be attending the show looks forward to meeting with all the visitors who come to our stand."

The stamp collection is currently available for pre-order and will available to order from August 12th. It can be purchased at iompost.com/aardman and at the show on the Post Office's stand.