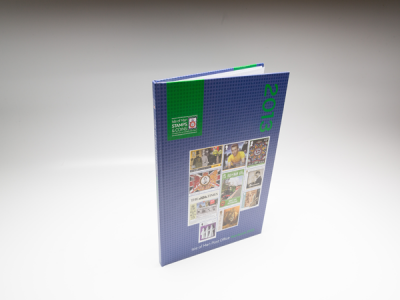 The bumper 80-page Yearbook brings together a mint condition set of every stamp issue and miniature sheet issued by Isle of Man Post Office in 2013 along with extra photographs and fascinating text about every issue. With 2013 being Isle of Man Post Office's 40th anniversary, the 2013 Yearbook has never been more collectable with a limited edition of just 1,000 copies.

Among the colourful issues contained in this unique book are celebrations of the Isle of Man – including the Fire and Rescue Service, Isle of Man Railways, our national symbol the Three Legs of Man, the 150th anniversary of the Isle of Man Constabulary, world renowned wildlife artist Jeremy Paul as well as showcasing the work of artist John Miller Nicholson.

During the year Isle of Man Post Office was especially proud of its officially licensed tribute to the 100th edition of the Tour de France and a wonderful issue paying tribute to singing superstar, Bee Gees legend and proud Manxman, Robin Gibb. It also saw huge interest in its postal tribute marking the much anticipated arrival of HRH Prince George of Cambridge.

Collectors of Isle of Man Stamps can also purchase the year collection of mint sets and presentation packs and with many customers having a collection dating back the last 39 years, this 40th anniversary year set is a definite must-have.

To view the Yearbook (priced £72) and Year Collection Sets (price from £72.00) and to pre-order please click here. These items are also available from the Post Shop at Regent Street Post Office, Douglas.