Postal tribute to Robin Gibb CBE to be attended by family 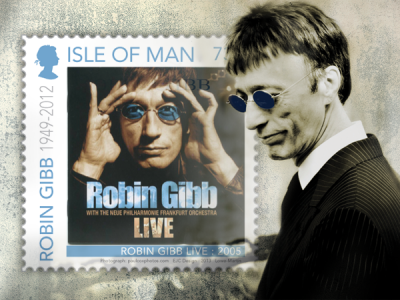 The Island will be paying tribute to one of its most famous Manxmen next week when the launch of a new set of stamps will be issued.

50 St Catherine's Drive in Douglas, the former home of the Bee Gees, will be the focal point of a very special launch of stamps reflecting the solo career of Robin Gibb – a fitting tribute to this legendary singer and songwriter who was born in the Isle of Man.

Robin's family - his wife Dwina and son Robin-John, will be visiting the Island on Wednesday (April 24) to officially launch the new stamps. They will also unveil a blue plaque, which will be situated above the front door of 50 St Catherine's Drive, organised by Douglas Borough Council to mark the childhood home of Robin and his brothers.

The launch, which will also feature an appearance from the Ballakermeen High School Choir, will be the Island's celebration of this wonderfully colourful and fascinating Manxman who never forgot his roots and would proudly tell people that he was from the Isle of Man wherever he went.

"The Isle of Man is immensely proud to have been the childhood home to the Bee Gees and this new stamp issue is a fitting tribute to Robin's solo career. The launch will be our chance to celebrate Robin as a singer and songwriter but also as a wonderful ambassador for the Island. He took a great interest in the Isle of Man throughout his life and indeed forged a special relationship with Rebecca House, the Children's Hospice which he opened with Dwina in 2008. As well as the set of stamps, we are producing a special folder which will include a DVD featuring episodes of his career in relation to the Isle of Man which has previously been unseen. The Gibb family has requested that royalties from this exclusive product are to be donated to Rebecca House."

"We are deeply honoured that Dwina and Robin-John will be travelling to the Island for this unique occasion. We encourage any fans of Robin to come along to St Catherine's Drive at 10.30am next Wednesday to watch the launch at no.50 and to join in with the celebratory atmosphere."

"We are delighted to be involved in such an exciting project. As previously mentioned, Robin and Dwina Gibb opened our children's hospice, Rebecca House and were very interested and keen to learn about the care our children's wing does, spending a lot of time during the opening with the families. We would also like to thank everyone involved in bringing the lovely product to fruition."

"The Borough of Douglas is proud not only to have been called "home" by Barry and the late Robin and Maurice during their early years but also to continue to be associated with their legendary musical achievements. It is therefore fitting that we honour the life and work of the Bee Gees - honorary Freemen of the Borough of Douglas - with this commemorative plaque."