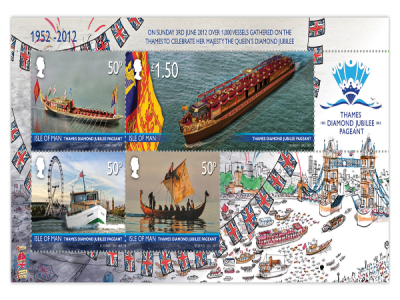 The only product of its kind to be issued to celebrate the Thames Diamond Jubilee Pageant, will be a special first day cover of stamps produced by Isle of Man Post Office.

The official licensed first day cover features the Royal Barge, Gloriana and two Manx vessels and is the ultimate souvenir from what is tipped to be the highlight of the Queen's Diamond Jubilee celebrations.

The Thames Diamond Jubilee Pageant will showcase one of the largest flotillas ever assembled on the Thames and the biggest collection of historic vessels. The Manx vessels: a lifeboat from the historic Lady of Mann ship (the last vessel present at Dunkirk to survive), now converted as a cabin cruiser and Vital Spark – one of four replica Viking longboats built to be used in the annual World Viking longboat races held in the Isle of Man, will both form a special part of 1,000 vessels and 20,000 people on the Thames on June 3.

"We are absolutely thrilled Her Majesty The Queen has approved this very special first day cover to celebrate such an historic event, which is expected to be the largest live public event ever held in London. It is particularly special to us as two vessels representing the Isle of Man will be showcased in the Pageant. A numbered limited edition of just 1,000, one for every boat in the Pageant, will be carried aboard a vessel in the flotilla and authenticated by the master of the vessel. Priced at just £10, I would encourage any Royal fan to pre-order their cover now to avoid disappointment."

"This magnificent Jubilee keepsake will capture the essence of the day's atmosphere and better still, a percentage of each sale will benefit the Thames Diamond Jubilee Foundation, the charitable trust set-up to raise funds for the charitable projects through The Queen Elizabeth Diamond Jubilee Trust" she added.

A piece of this historic day to keep is a must, so don't miss out. The first day cover will be officially issued on June 3 but can be pre-ordered now online here or by calling +44 1624 698430