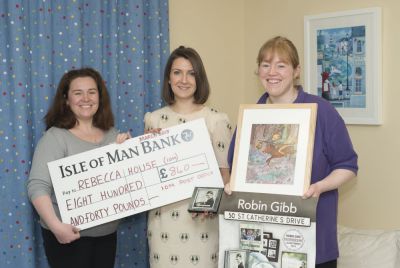 Isle of Man Post Office released a limited edition Robin Gibb collection on September 29, 2014. Entitled 50 St Catherine's Drive, named by Robin to commemorate his first home on the Island, the collection features his final album with many of Robin's last compositions and recordings as a solo artist. The collection also reflects on his legendary solo career with royalties from its sale donated to Rebecca House.

The limited edition collection was released in partnership with Dwina Gibb, Robin Gibb's widow and combines the CD of Robin's final solo album, 50 St Catherine's Drive, together with an Isle of Man Post Office limited edition DVD, a special booklet containing an extract from Robin's biography and a booklet containing a full set of Robin Gibb stamps. This special limited edition of 1000 also contains an insert signed by Dwina Gibb and postmarked with a special silver foil cancellation for September 29th 2014. Everything is contained beautifully within a CD jewel case.

For every limited edition collection sold, Robin's wife Dwina Gibb requested that the royalties from this exclusive product be donated to Rebecca House, the children's hospice on the Island which she and Robin officially opened in 2008.

Accepting the cheque for sales of the limited edition collection to date, Mary Doyle, PR & Marketing Manager of Hospice Isle of Man said: "We are very grateful to the Gibb family for its on-going support of Rebecca House and to Isle of Man Post Office who created this beautifully presented limited edition collection that has helped to raise the money for the charity and which pays a stunning tribute to the life and career of Robin Gibb."