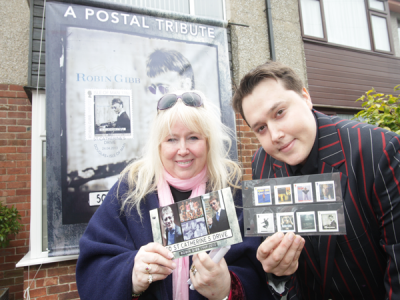 The Isle of Man has paid a poignant tribute to one of its most famous Manxmen Robin Gibb CBE today (Wednesday).

A special launch was held at the childhood home of Robin Gibb and his Bee Gees brothers at 50 St Catherine's Drive, Douglas in the Isle of Man.

Robin's wife Dwina and son Robin-John travelled to the Island to celebrate the legendary singer and songwriter by unveiling an emotional postal tribute in which Robin features on a new set of stamps issued by Isle of Man Post Office. While the poignant tribute was unfurled among family, special guests and fans of Robin, the choir of Ballakermeen High School sang Ellan Vannin – the alternative Isle of Man national anthem which Robin had deep affection for.

Robin was born in the Isle of Man and was proud to call it his home despite also having lived in Manchester and Australia while growing up. On unveiling the stamps, his wife Dwina described the moment as "deeply moving and fantastic – I love the stamps', indeed everyone present felt the family's overwhelming emotion.

"It was very emotional seeing the enormous picture of Robin but I loved seeing it. Robin was so proud to be from the Isle of Man, he loved its ambience and its people and was always proud to be an ambassador for the Island. If he were here today he'd be immensely honoured to be recognised in this very special way."

During the launch, a blue plaque situated above the front door of 50 St Catherine's Drive, organised by Douglas Borough Council, was also unveiled to officially mark the property as the childhood home of the Bee Gees who became world famous for their hits including 'Night Fever', Jive Talkin', 'How Deep is Your Love' and 'I've Gotta Get A Message To You' to name just a few.

"Today has been immensely special for the Isle of Man. We are proud to say that Robin and his brothers were from the Island and indeed they have been great ambassadors ever since. The postal tribute has been our way of celebrating the life of Robin and his solo career which ties in with the posthumous release of his album entitled '50 St Catherine's Drive' due for release in the Autumn. In addition, royalties from the special charity stamp product are being donated by the Gibb family to Rebecca House, the Isle of Man children's hospice which Robin and Dwina opened in 2008. Robin never forgot the Isle of Man and indeed the Isle of Man will never forget him and today has truly shown how deep the Island's love for Robin is."

You can view the stamps here