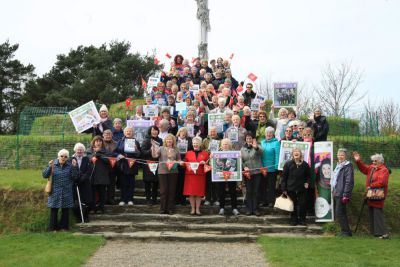 Following a damp but cheerful tree planting event in the Jubilee Wood and warming lunch, WI members retired to Royal Chapel at St Johns where they admired reproductions of the eight celebratory stamps produced by Isle of Man Post Office which highlight some of the campaigns undertaken by the Institute since its establishment over 100 years ago in Anglesey.

WI Chairman Linda Owen introduced the launch event with a welcoming speech which stressed the commitment and cheerful determination of WI members, she said:

"For home and country: this has been the WIs watchword since its inception and has a particular resonance for us today. Whatever our personal histories the Isle of Man is our country, the Isle of Man is where we have made our homes and it is here that we try to live out the highest ideals of the WI."

She continued: "Today we thank the Isle of Man Post Office for helping us to celebrate and make widely known the WI and our first hundred years and for helping us so significantly with our current campaign."

President of Tynwald, the Hon Clare Christian MLC then presented a narrative of the WI and talked about how it has evolved here on the Island since its establishment of 65 years ago.

Finally, Maxine Cannon, General Manager of Isle of Man Stamps and Coins introduced the newly released stamp issue which demonstrates the WIs campaigns including its current "Time to Talk" campaign which is around organ donation. The Post Office has been working closely with the Isle of Man WI Federation to support and raise awareness of organ donation through the issue of its stamps, postmark advertising and an Island wide door to door leaflet drop. To add to this, representatives from the local WI also visited Isle of Man Postal Headquarters following the stamp launch to speak with interested staff members on the matter.

The event was then wrapped up in style with members filling the steps of Tynwald Hill for a photo opportunity, followed by a verse of the Manx National Anthem and Jerusalem, the signature tune.

Pictured is a selection of members from the Isle of Man WI Federation including Madam President on the steps of Tynwald Hill holding stamp blow ups, campaign boards and Manx flags.