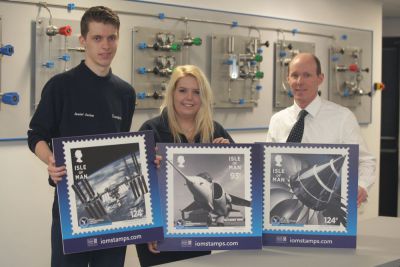 Isle of Man Post Office and Royal Aeronautical Society (RAeS) have aligned with one another to celebrate the Society's sesquicentennial year with a set of stamps depicting a truly remarkable history of aerospace innovation and exploration over the last 150 years. The Isle of Man has been central to a number of these achievements from the design and manufacturing of parts and precision components to involvement on the International Space Station (ISS). The stamps are due for lift off on 12 January 2016.

The RAeS is the world's only professional body dedicated to the entire aerospace community, it promotes the highest professional standards in all aerospace disciplines and acts as a central forum for the exchange of ideas whilst playing a leading role in influencing opinion in aerospace matters.

The Isle of Man has a long heritage in aerospace manufacturing excellence and can trace its origins as far back as the 1930s when Sir George Dowty (founder of Dowty Group) invented aircraft retractable landing gear. Today the industry continues to evolve, largely supported by The Isle of Man Aerospace Cluster (IOMAC), a collaboration of 22 companies which include Swagelok, Triumph Actuation Systems (formerly Dowty Group) and Ronaldsway Aircraft Company.

Commenting on the Islands manufacturing capability Nigel Brown, Managing Director of Ronaldsway Aircraft Company said: "The Isle of Man is home to a number of companies that manufacture major parts and precision components involved in the aerospace industry and it's great to see the stamps produced by Isle of Man Post Office celebrating 150 years of aerospace innovation. The stamps promote the Island's manufacturing capability by highlighting some of the major developments in aerospace that local companies and their staff have been involved with."

The dream of flight was eventually realised in the late 18th century and Vincenzo Lunardi made the first balloon voyage in Britain in 1784. Man travelled by balloon for over a century before the first powered controllable aeroplane left the ground. Sir George Cayley's understanding of the principles of heavier-than-air flight was a great advance over anything that had previously been formulated and in 1799 Caley, 'The Father of Aeronautics', set forth the concept of the modern aeroplane as a fixed-wing-flying machine with separate systems for lift, propulsion, and control. Thereafter, progress of mechanical flight advanced quickly from the Wright Brothers first manned flight in 1903 to Yuri Gagarin's first manned space orbit of earth in 1961 and finally, the first passenger supersonic airliner Concorde in 1976.

The stamps capture an incredible history of aerospace innovation and exploration over the last 150 years using a range of colour and black and white high definition images along with accompanying industry commentary by Brian Riddle, Chief Librarian of the National Aerospace Library, who provides a potted history of aerospace innovations over the last 150 years. Depicted is Vincenzo Lunardi's ascent of the hydrogen balloon in 1784, Sir George Cayley in 1853 with his fixed wings design, a French-built Wright Flyer rounding a pylon at Reims air event in 1909 and Russian Cosmonaut Yuri Gagarin who achieved the first manned space orbit of earth in 1961.

In addition are The Hawker PII27 aircraft – a prelude to the Harrier Jump Jet which made its first free flight in 1960 with components produced by the Ronaldsway Aircraft Company and Dowty, British Airways Concorde which undertook the first supersonic airline passenger flight in 1976 with manufacturing involvement from Ronaldsway Aircraft Company, Dowty Aerospace and Asystem. Also pictured is the Rolls-Royce Trent 900 turbofan engine - one of the company's most successful jet engines which Ronaldsway and Swagelok were involved in from the very early stages of its creation. Finally pictured is the International Space Station – the biggest structure ever placed in orbit around the earth with which there are now many Manx connections. The stamps also incorporate an ingenious selective varnish and metallic over-layered print technique which adds shine and lustre to the set.

Reflecting on the Islands standard of manufacturing, David Hester, General Manager of Swagelok Ltd said: "We are very proud of the high standard of engineering and manufacturing on the Isle of Man. We are investing in our local businesses and we already employ around 7% of the working population in this business sector. Our products are world class and used in many extreme, mission critical applications around the world. We are also happy to support the increasing number of young people who are choosing engineering as a career on the island."

Commenting on the stamps, Chris Allen, General Manager of Triumph Actuation Systems said: "On behalf of Triumph Actuation Systems in Onchan I would like to congratulate the Royal Aeronautical Society on their 150th Anniversary. We are unsurprisingly passionate about aerospace here and were delighted at the wonderful commemorative stamps depicting significant aerospace achievements over the past 150 years. We have been engaged in the aerospace sector ourselves for over 70 years and can relate some of our own products to the achievements pictured in the stamps"