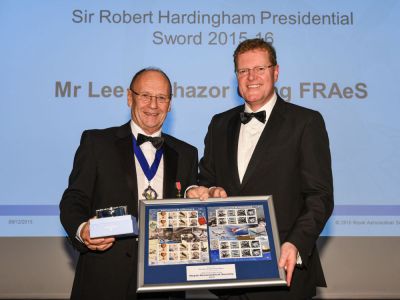 Isle of Man Post Office's Royal Aeronautical Society (RAeS) stamp collection celebrating the Society's 150th anniversary was unveiled at the Society's Wilbur & Orville Wright (WOW) annual lecture in London on Wednesday (10 December) and coincided with the announcement and presentation of the 2015 RAeS Honours, Medals and Awards.

The RAeS WOW lecture was established in 1903 to honour the distinguished and experienced aeronautical engineers who completed the first successful controlled powered flight and is the principal event in the Society's year, given by notable members of the UK and US aerospace community.

At Wednesdays lecture, Nigel Whitehead, Group Managing Director at BAE Systems, explored what the future holds for the UK military air sector in the context of the UK's long and proud history of being at the forefront of the military air power sector, boasting a world renowned Air Force and innovative industry. Mr Whitehead also provided his own insight into how the RAF's operational requirements will be affected and how industry strategies will need to adapt to the changing threat environment, particularly through the development and use of new technology.

The Post Office's set of eight RAeS stamps which depict a truly remarkable history of aerospace innovation and exploration over the last 150 years were revealed at this year's lecture by Maxine Cannon, General Manager of Isle of Man Stamps and Coins and received a really positive response. Finally, at the end of the lecture Martin Broadhurst, RAeS President presented Nigel Whitehead with a framed set of the RAeS anniversary stamps.