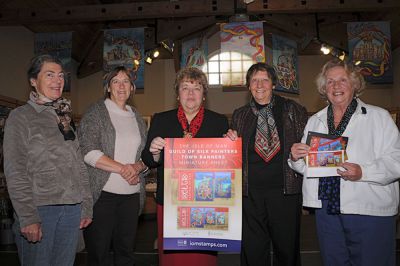 The Post Office unveiled a stunning and vibrant miniature sheet celebrating the exemplary works of The Isle of Man Guild of Silk Painters in the production of its silk town banners. The stamp launch took place on the morning of October 23 at the House of Manannan in Peel, where the banners will now remain on display as part of The Island of Culture 2014, after which they will be passed to the relative town commissioners for display in the Island's town halls.

The seven banners were created by The Isle of Man Guild of Silk Painters for The Celtic Kingdom Festival of Silk 2013 when the Island's Guild hosted the bi-annual festival. The design and painting of the banners was undertaken by seven of the Guild's artists - Anne Cannell, Chris Cowell, Sarah Goulden, Betty Hopson, Hilary Bruce, Jean Buck and Jan Avron-Cotton with help from Mary Gulland and portray the Island's heritage sites, buildings and activities unique to each area.

This exquisite and vibrant miniature sheet showcases three of the seven banner designs produced by the Isle of Man Guild of Silk Painters - Castletown with an image of Castle Rushen topped with a crown, Ramsey with the town's emblem and a visual of the Albert Tower, and Port St Mary framed as the stamp uses the town's emblem followed by a map of the Island, a loughtan sheep, the Legs of Man and the bright red sails of a Manx nobby fishing boat.

At last week's launch event, the Post Office invited the Guild's artists responsible for the silk banner designs along with the town commissioners to The House of Manannan to celebrate the release of the stamp.

Jean Buck of The Isle of Man Guild of Silk Painters said: "The miniature sheet is a splendid display of our work. The launch at the House of Manannan was "the icing on the cake" for the Island's Silk Painters Guild. We are thrilled to realise our work will now be seen worldwide."

Maxine Cannon, General Manager of Isle of Man Stamps and Coins said: "We are delighted to be linked with this amazing piece of artistry, the beautiful images used on the banners portray the Island's key heritage sites in a captivating and evocative manner."