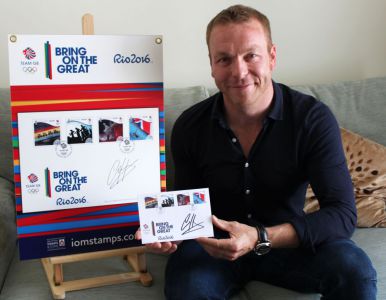 On Tuesday May 24th, Isle of Man Post Office representatives met with Sir Chris Hoy MBE as part of the launch of their Team GB Rio 2016 stamp collection. Sir Chris was visiting the Island for the DED's (Department of Economic Development) inaugural ISLEXPO 2016 on the Isle of Man on May 25th, and made time in his busy schedule to help promote the stamps.

Sir Chris talked about his role as a Team GB Great (an ambassadorial role for Team GB), the upcoming Rio 2016 Olympic Games and how the post office's stamps support Team GB. Sir Chris then signed 500 limited edition covers, from the sale a percentage from each will go to a charity of his choice.

Sir Chris Hoy is Britain's most successful Olympic athlete of all time, with six gold medals and one silver. Sir Chris won his first Olympic gold medal in Athens 2004 in the Kilo time trial. He then followed this at Beijing 2008 by winning the Keirin, Sprint and Team Sprint. In doing so he became the first British Olympian in 100 years to win three gold medals in one Olympic Games. At the London 2012 Games Sir Chris won his fifth and sixth gold medals in the Keirin and Team Sprint and, added to the silver he won at the Sydney 2000 Olympic Games, this completed his record haul for a British athlete.

Now, with Rio 2016 almost upon us, Team GB is getting ready for an Olympic Games which promises a record number of participating countries, with Manx athletes once again being part of Team GB. Record breaking shooter and double Commonwealth Games medallist, Manxman Tim Kneale, will be making his Olympic debut at Rio 2016, and a number of other Manx competitors including Mark Cavendish, Peter Kennaugh MBE and Ben Swift remain Team GB hopefuls for the Games.

Amongst other sports, the Isle of Man has a strong heritage in cycling. The seeds of the Island's cycling success lies in the junior cycling league that each week attracts over 300 keen cyclists from the age of 2 to 16 and of which Peter Kennaugh MBE and Mark Cavendish were members.

Commenting on the how the official stamps and products will help support Team GB and bring emphasis to the Rio 2016 Olympic Games, Sir Chris Hoy said: "The official first day covers for Team GB are just about to be launched and they look fantastic, and it's a fantastic way for the public to support the team, to get behind them, to back them and also to have some nice memorabilia to remember the Games by."

Maxine Cannon, Isle of Man Stamps & Coins General Manager said: "We were delighted when Sir Chris agreed to endorse our commemorative stamp covers as a Team GB Great. He is a true inspiration not only to cyclists but also to all athletes and those juniors who look to follow in his footsteps."