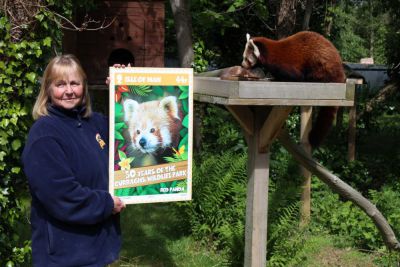 Isle of Man Post Office is pleased to present a set of stamps and other collectables produced in collaboration with Curraghs Wildlife Park to celebrate the Parks 50th anniversary and in memory of Patricia Harvey, Isle of Man Photographic Society wildlife park photographer and loyal Park supporter. The collection which depicts some of the Curraghs Wildlife Park's most successfully bred endangered species is due for release on July 3, the same date in which the Park will also be celebrating the landmark anniversary of its opening.

Curraghs Wildlife Park has been home to some of the world's most endangered species since it opened in 1965, providing education and recreation to thousands of visitors each year with the aim of bringing people from around the world close to wildlife in a natural and open setting.

Set in a natural wetland habitat, the Park and surrounding area is a designated RAMSAR site which in 2006 was recognised as a place of international scientific interest. It is also a member of the British and Irish Association of Zoos and Aquaria (BIAZA), the European Association of Zoos and Aquaria (EAZA), and is participating in breeding programmes that is part of a worldwide effort to manage populations of captive endangered species. Over the last 50 years the Park has successfully bred a number of endangered birds and animals, several of which feature in the collection and include - fishing cats, red pandas, Humboldt penguins, Waldrapp ibis and Rodrigues fruit bat to name but a few.

The stamps along with other collectables including postcards, first day covers and presentation packs, beautifully picture the endangered species photographed at the Wildlife Park, depicted in their natural habitat. This along with details of the animal or bird and Isle of Man Photographic Society photographer.

Curraghs Wildlife Park Duty Manager, Tina Jauncey said: "Curraghs Wildlife Park is proud to collaborate with Isle of Man Post Office on its 50th anniversary to present a set of stamps that beautifully depict some of the worlds most endangered species kept within the Park, images courtesy of the Isle of Man Photographic Society. The stamps will be officially launched on July 3 and to celebrate this momentous occasion admission to the Park on the anniversary day will be half price and a whole host of other celebrations are also planned for the weekend."

Maxine Cannon, Isle of Man Stamps and Coins General Manager said: "We are delighted with the stamps and other collectables which showcase many of the rare endangered species in the Park; they would make the perfect gift for young philatelists and animal lovers. Collaborating with so many local photographers within the Photographic Society has also been a great way to promote the important conservation work that has been taking place at the Park over the last half century."

To view the The Curraghs Wildlife Park 50th anniversary stamps and collectables or to order click here.