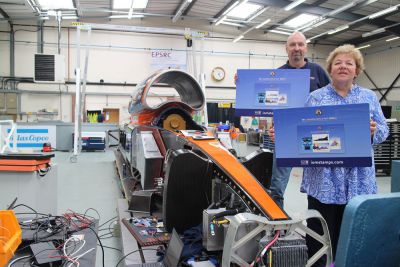 BLOODHOUND is the ambitious programme to set a new land speed record with a supersonic car capable of reaching 1,000mph.

To reflect the incredible levels of engineering excellence involved in the project, the miniature sheet features three special print finishes; metallic ink, varnish and thermochromic ink, which disappears when heated to reveal a technical drawing of the BLOODHOUND car. In addition to promoting the British-led bid to set a new world record, the miniature sheet BLOODHOUND SSC - The Adventure Takes Shape commemorates the project's links to the Isle of Man. Important elements of the car are being designed and made in the Island, including an essential regulator created by Swagelok which will play a crucial role in the car's fuel system, alongside other functions.

The Isle of Man's association is further strengthened with a visit to the Island by the BLOODHOUND team to inspire the next generation of Manx engineers. During the two-day trip in September, groups of schoolchildren will hear from team members about how every component, however small, is vital to the project's success.

It is hoped the trip, organised by the Isle of Man Engineering and Manufacturing Sector and the Isle of Man Government's Department of Economic Development, will inspire more youngsters to consider engineering as a career and take advantage of opportunities created by the private and public sectors in partnership.

The sheet, designed by Isle of Man Advertising & PR and featuring two stamps, will be issued on 22nd September, during the visit, and will cost £4.50.

Maxine Cannon, General Manager, Isle of Man Stamps & Coins, said: 'We are delighted to be working with the BLOODHOUND team to highlight this ambitious project to break a world record. It is a marvellous example of British ingenuity and engineering excellence, and we're particularly proud that components made and designed right here in the Isle of Man are part of the adventure. This exciting application of technology should prove inspirational to youngsters and encourage them to consider a career in engineering, and that is certainly the aim of the visit in September. The Isle of Man has a strong and busy engineering sector and private firms are working with government to bring in more young people to the profession.

'Given the "hi-tech" nature of the BLOODHOUND project we felt it was only fitting to apply some extra printing techniques to the miniature sheet, including thermochromic ink which adds a very different element to this stamp issue.'

Tony Parraman, Head of Sponsor Liaison at BLOODHOUND, added: 'The BLOODHOUND Project aims to set a new world land speed record which will go in to the history books. Being part of the Isle of Man stamp collection will be part of recording that history. Stamps are collected across the world and are a record of our past in miniature, and it is a great honour to have the car as part of the Isle of Man Post Office's collection.'

BLOODHOUND SSC - The Adventure Takes Shape can be ordered from www.iompost.com/Bloodhound.