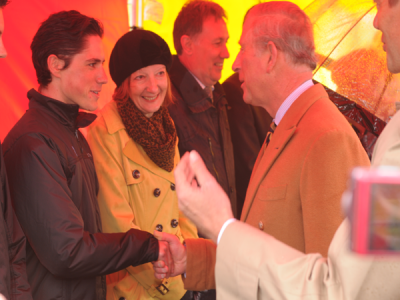 The Isle of Man Post Office is pleased to present this special commemorative cover to mark the visit of His Royal Highness Prince Charles & The Duchess of Cornwall to the Isle of Man.

On 26th April 2012 the Isle of Man played host to two very special Royal visitors – His Royal Highness The Prince of Wales and The Duchess of Cornwall - who were on a whistle stop tour as part of the Queen's Diamond Jubilee celebrations.

Despite the wet and windy weather, the visit was an overwhelming success and Royal fans and schoolchildren crowded the streets where the couple visited. Their first port of call was the National Sports Centre in Douglas where His Royal Highness started a four-lap outdoor race for members of the 'Team Royal London 360 Isle of Man Cycling Club' among crowds of children from Manor Park School who waved Manx flags in support of the competitors and the VIP guests. Once the race was completed, Their Royal Highnesses met local residents World Champion cyclist Peter Kennaugh and scratch race World Champion Ben Swift along with members of the cycling club and parents of young cyclists.

The couple then headed west to Peel where clusters of onlookers gathered to get a glimpse of them, wave their Manx flags and hope for the chance to shake hands with a member of the Royal Family. At the House of Manannan, a museum which guides visitors through the Island's rich Celtic, Viking and Maritime past, Their Royal Highnesses spoke to local food producers including the Apple Orphanage Co, Green Mann Spring, Ellerslie Rapeseed Oil, Isle of Man Creamery, Laxey Glen Flour Mills and Ramsey Bakery. They viewed first-hand the stunning selection of produce which is created using Manx resources to create high quality local foods. Also at the reception were young farmers, from all sectors of the industry, along with representatives from the local Prince's Trust, the Manx Wildlife Trust and the Manx Osteoporosis Society. The Prince is Patron of The Wildlife Trusts and the Duchess of Cornwall is Patron of the National Osteoporosis Society.

Following the House of Manannan, events moved quayside where The Prince of Wales and The Duchess of Cornwall were introduced to the crew of 'Vital Spark', a replica Viking longship which will be taking part in the Thames Diamond Jubilee Pageant on 3rd June. There was also an opportunity to meet local fishermen before attending the launch of the regeneration of the Isle of Man Food Park, touring a sustainable scallop processing facility and unveiling a plaque to mark the start of the redevelopment. Their final visit led them to Peel Lifeboat Station to meet Royal National Lifeboat Institution (RNLI) volunteers, Coastguards and members of the emergency services. The RNLI is particularly important to the Island as its founder Sir William Hillary was a former resident.

Despite the Island's inclement weather on the day, the visit still brought out, in force, the Royal fans and schoolchildren who thoroughly enjoyed seeing the Royal couple in such a momentous year for the British Royal Family. The Island looks forward to the next time it's greeted with such prestigious guests.

The Charles & Camilla Royal Visit Commemorative Cover, a stunning keepsake from the day which includes a filler card featuring text and a selection of photographs from the visit, is priced at £10 (QB96). Please visit our website here to find out more about our stamps and products and how to purchase them