Stamps to mark the 100th edition of the Tour de France 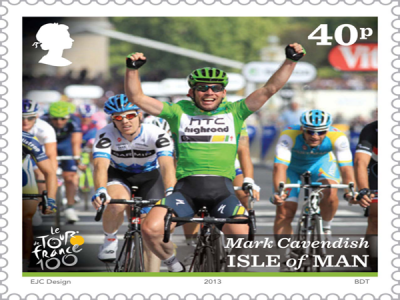 Widely regarded as the world's biggest annual sporting event, the Tour de France will mark its 100th edition this year.

To celebrate, Isle of Man Post Office is issuing a set of eight postage stamps honouring its greatest champions and the role that Britain and indeed the Isle of Man has played in adding to the colourful history of the world's greatest race. The issue date is June 19.

Le Tour as it's now known, started in 1903 with the first British riders taking part in 1937 but it wasn't until 1958 that the first Briton, Brian Robinson won a stage. Indeed the Yorkshireman has played a key role in bringing the tour to his home country for the Grand Départ in 2014, so there are several reasons why he has been chosen to feature on one of the values.

The Isle of Man has played its part in generating interest in the Tour too. For more than 50 years Isle of Man International Cycling Week attracted a long list of Tour de France riders including Coppi, Anquetil, Merckx, Simpson, Fignon and Roche. Mark Cavendish, the first and so far only Manx rider to compete in the Tour, has 23 stage wins. He won the Green Jersey in 2011 and Bradley Wiggins became the first Britain to win the Tour outright in 2012. Both of these legendary British riders are depicted on the stamps.

The Yellow Jersey first appeared in the Tour in 1919 so that spectators and the press could easily identify the race leader. Frenchman Eugène Christophe was the first rider to wear the Maillot Jaune.

In its history only four men have won the Tour five times so it's fitting that they are each honoured with their own stamp in this issue: Frenchmen Jacques Anquetil and Bernard Hinault, Belgium's Eddy Merckx and Spain's Miguel Indurain.

There are just eight images from 100 Tours featured in this stamp issue but each one honours one of its greatest champions.

Please visit our website here to find out more about the Tour de France collection of stamps and products and to pre-order.