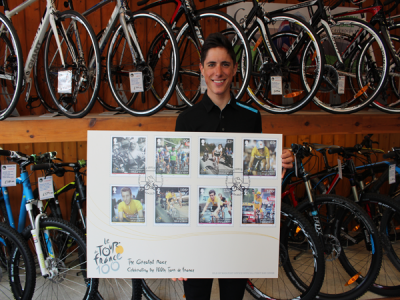 Isle of Man Stamps & Coins have officially launched their Tour de France Edition 100 set of 8 stamps at an event with Peter Kennaugh MBE.

Recently confirmed as a rider for Team Sky, Peter was presented with the stamps and collector's products at a local Isle of Man bike shop which has supported many Isle of Man cyclists over the past 20 years.

"We are extremely proud to have been given worldwide rights to produce exclusive items for Le Tour 100 in recognition of the tremendous contribution of the Isle of Man to the colourful history of the world's greatest race. For more than 50 years, Isle of Man International Cycling Week attracted a long list of Tour de France riders. We're delighted to be a part of this global event."

"I think the Tour de France stamps issued by Isle of Man Post Office are pretty cool. They really showcase Le Tour and I think it's great that they always go to the effort of producing stamps to mark sporting events, achievements and Manx sportsmen. Interest in cycling is massive and is growing all the time around the world. It's particularly popular on the Isle of Man and I know the Island is 100% behind me in its support as I prepare to take part in this year's Tour de France – it's an enormous boost and I feel very proud."

Isle of Man Stamps and Coins will issue a varied range of products during Le Tour to capture instantly cycling history in the making. Please visit our website and social media platforms to get the latest news on all our products on Facebook/IsleofManStampsandCoins