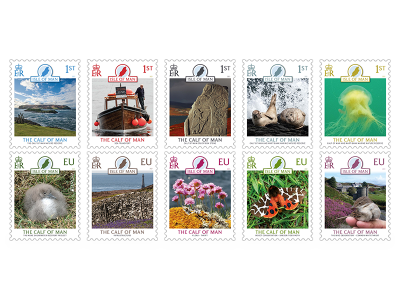 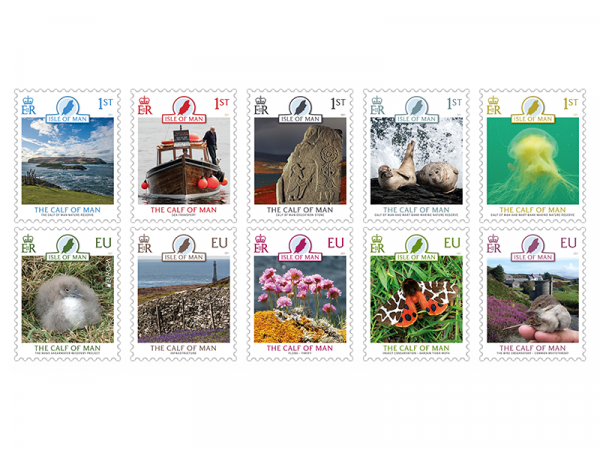 Isle of Man Post Office celebrates the 70th anniversary of the founding of the Manx National Trust, now part of Manx National Heritage, with a set of ten beautiful stamps. The stamps document the environmental and historical importance, unique character and outstanding natural beauty of the Calf of Man - the precious tiny island at the southern tip of the Isle of Man.

Edmund Southworth, Director of Manx National Heritage said “This wonderful stamp issue by Isle of Man Post Office captures the essence of the Calf of Man, reflecting the varied flora and fauna to be found on this small island, as well as its important cultural history and heritage.  Seventy years on from the founding of the Manx National Trust in 1951, as guardians of the Calf of Man, Manx National Heritage is grateful to Isle of Man Post Office for helping to highlight the valuable on-going conservation and research work centered around the Bird Observatory that we carry out there in conjunction with Manx Wildlife Trust”

Maxine Cannon, General Manager Isle of Man Stamps & Coins, said: “It’s always a real and distinct pleasure to be able to bring to the fore any of the iconic beauty spots the Isle of Man has to offer. The Calf of Man will always have a special place in the heart of true Manxies as well as anybody who has had the pleasure of visiting it themselves. Whether as part of an interest in the cultural significance or simply to enjoy the natural beauty on offer, I am sure collectors as well as people from all walks of life will enjoy this stamp issue as much as I do. We would like to thank Shaun Murphy and Dr. Erica Spencer of Manx National Heritage and Dr. Lara Howe of Manx Wildlife Trust for their invaluable expert assistance.”

Isle of Man Post Office dedicates this issue to Dr. Trevor Norton (Sheffield, 1940–Isle of Man, 2021), formerly Professor of Marine Biology at Liverpool University and Director of the Port Erin Marine Laboratory, Isle of Man (1983–2005). Dr. Norton was a long-serving, well-respected and supportive Trustee of the Manx Museum and National Trust serving from 1984 to 2012.

We would like to take this opportunity to extend our very best wishes to Edmund Southworth, Director at Manx National Heritage, as he enters retirement. His advice and support has been invaluable since taking up the post in 2009.