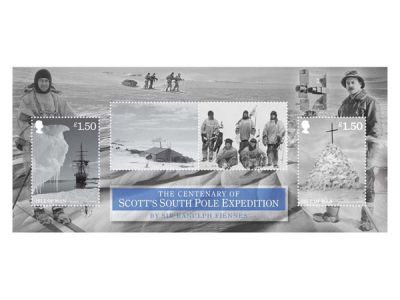 The Isle of Man Post Office is pleased to present this stamp issue commemorating the centenary of Scott's heroic expedition to the South Pole.

When Britian first sent 'Torpedo' Lieutenant Captain Robert Falcon Scott and his ship Discovery south to Antarctica, the box camera had been invented and was as vital a part of any expedition as a pith helmet or an ice axe. That was in 1901 – the twentieth century – yet Antartica was still unexplored. Nobody even knew if it was a continent or merely a mass of floating ice. In 1910, Scott's Terra Nova expedition was sent to penetrate this vast and hostile region, to devise the best method of travel there and with a band of top-rate scientists under his control, to gain knowledge in the cause of science. He chose the best scientists from all over the Commonwealth as well as the best professional photographer-cum cinematographer, Herbert Ponting, whose reputation was already firmly established in London after an exciting life in remote lands about which he lectured with magic lantern slides.

His images confirm Ponting as one of the truly great photographers of the twentieth century, especially considering the extremely demanding conditions under which he had to work in Antarctica. In the 1970s, I worked as a photographer and cinematographer in Antarctica and even then, with vastly improved camera, lenses, films and ancillary gear, I still found even the simplest photographic activity extremely demanding in the ultra-low temperatures. In the 1970s, a character-assassinating biography of Scott and a nine-hour equally distorted television programme based on that book attacked the explorer and his achievements. His posthumous record was besmirched and, in 2002, I decided to set the record straight and reassert historical reality in place of the groundless myths successfully propogated by the book and the film. I am delighted that my resulting book Captain Scott is now followed by this stamp issue to remind us all of the stark reality of the conditions faced by Scott and his men, the very first human beings to penetrate and learn about Antarctica.

Although Amundsen was the first to reach the Pole, towed there by dog power, Scott was the first to arrive by pure man power. The US scentific station at the South Pole is called the Scott Amundsen South Pole Station in recognition of two great but very different achievements. The greatest of French polar explorers, Dr. Jean Charcot, wrote in Le Matin: "Scott has conquered the Pole. The public, ill-informed, will say he reached his goal only second: but those who know – Amundsen and Shackleton among them – will say that it was Scott who opened the road to the Pole and mapped out the route, shedding a reflective glow upon his country." He added: "Scott did not turn aside from his scentific programme...It is quite another thing with Amundsen.

He is not a scientist. He is being sent only on setting up a record. If one wishes to pronounce the one greater than the other, the preference must go to him who surrounds his expedition result with the greatest number of discoveries and scientifc observation."

One of Amundsen's great Pole team members, Helmer Hanssen, said: "It is no disparagement of Amundsen and the rest of us when I say that Scott's achievement far exceeded ours... Just imagine what it meant for Scott and the others to drag their sleds themselves with all their equipment to the Pole. We started with fifty-two dogs and came back with eleven and many of these wore themselves out on the journey. What shall we say of Scott and his comrades, who were their own dogs? Anyone with any experience will take off his hat to Scott's achievement. I do not believe men ever have shown such endurance at any time, nor do I believe there will ever be men to equal it."

This stamp issue is a fitting tribute, not only to a story of great heroism and courage, but also to Herbert Ponting, an artist of the highest quality.

Please click here to find out more about the Centenary of the Scott's South Pole Expedition collection of stamps and to pre-order.