The Centenary of the Royal Flying Corps 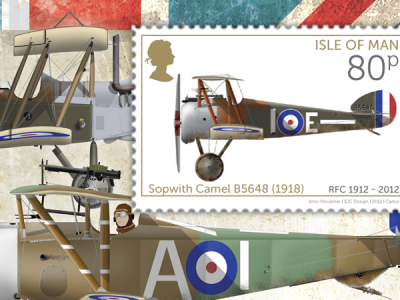 The Isle of Man Post Office is pleased to present a set of six stamps commemorating the 100th Anniversary of the formation of the Royal Flying Corps.

The Royal Flying Corps was formed by Royal Warrant on 13th April 1912. It comprised a Military Wing, a Naval Wing, the Central Flying School at Upavon and the Royal Aircraft Factory at Farnborough. By the time it had assumed control of the Air Battalion of the Royal Engineers a month later, it could record a miscellaneous collection of around 20 different types of aircraft – many of dubious quality.Just over two years later, led by Brigadier General Sir David Henderson, the RFC went to war. Four squadrons flew to France and the RFC had 63 aircraft supported by 900 men. By the Battle of Loos in September 1915 the RFC strength had increased to 12 squadrons with 161 aircraft and by the time of the first major air actions at the first Battle of the Somme in July 1916, there were 27 Squadrons with over 420 aircraft on roll plus a further 216 in depots and training.

The RFC first went into action on 19 August 1914 when two aeroplanes took off to seek the advancing German forces. Reconnaissance and artillery spotting was to be the principal task of the Corps over the duration of the War. The Royal Aircraft Factory designed BE.2 series of aircraft and was the most widely used for this kind of mission later followed by the RE.8 and AW.8 types.

Scout aircraft gradually evolved. At first there were no 'fighter' squadrons as such with types mounting a single non-synchronised machine gun being issued in small numbers to squadrons tasked with other duties. Early scout types such as the Nieuport carried a gun on the top wing so when fired the bullets passed over the arc of the propeller whilst other 'pusher' types were designed with the engine behind the pilot and gunner such as the Gunbus, the FE.2 or the single seat DH.2.

With the adoption of the synchronised machine gun the number of scout types grew and the first dedicated squadrons were formed to defend the RFC's reconnaissance aircraft and to prevent enemy aircraft carrying out their duties. Amongst these early fighter squadrons was NO.54 flying the Sopwith Pup, NO.56 using the SE.5 and the famous Sopwith Camel first issued to NO.70 Squadron. By 1918, 13 squadrons of the RFC were flying this diminutive type with its twin machine guns.

At first RFC aircraft were unmarked but later Union Jack flags were painted on the wings to distinguish them from the 'Hun'. By 1915 most aircraft had the familiar red, white and blue cockades applied. As the war progressed, plain fabric covered aircraft had their upper surfaces painted in a dark brown protective colour defined as PC. 10.

Major General Hugh Trenchard, as Commander of the RFC in France for much of the war, was the driving force behind the expansion of the RFC so that by the final days of the RFC over 1200 aircraft were deployed on the Western Front. At home, the RFC Home Establishment was responsible for training air and ground crews and preparing squadrons to deploy to France. The RFC provided squadrons for home defence, defending against German Zeppelin and later the Gotha bomber raids. The RFC was also deployed to the Middle East, the Balkans and later to Italy.

Eleven members of the RFC were awarded the Victoria Cross and some of these pilots became household names - Albert Ball and James McCudden being just two examples. The motto of the RFC, Per Ardua ad Astra (Through Adversity to the Stars) lives on through the RAF.

Please visit our website here to find out more about the Centenary of the Royal Flying Corps collection of stamps and products and to pre-order.