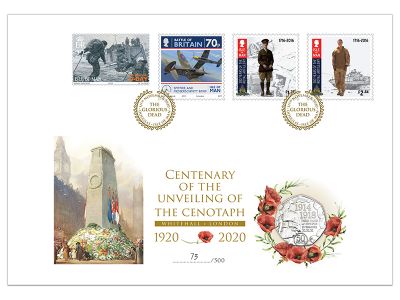 The Cenotaph is the site of the annual National Service of Remembrance held at 11:00 am on Remembrance Sunday, the closest Sunday to 11 November (Armistice Day).

This brand new limited edition cover recognises the unveiling of the Cenotaph and remembers those men and woman who made the ultimate sacrifice.  This beautiful tribute for which there are only 500 available combines an official legal tender Remembrance Coin along with four stamps which represent the armed services.

Inside the deluxe envelope you will unveil absorbing issue text by Isle of Man Post Office about the history of this historic monument.

Your cover will be completed with a signed Certificate of Authenticity confirming the limited edition.

Designed by Edwin Lutyens, an advisor to the Imperial War Graves Commission, the permanent structure was built from Portland stone between 1919 and 1920 by Holland, Hannen & Cubitts, replacing Lutyens' earlier wood-and-plaster Cenotaph in the same location. An annual Service of Remembrance is held at the site on Rememberance Sunday each year. Lutyens' Cenotaph design has been reproduced elsewhere in the UK and in other countries of historical British allegiance including Australia, Canada, New Zealand, Bermuda and Hong Kong.