The Diana Stamps - A postal tribute to Diana, Princess of Wales by The Isle of Man Post Office and Arthur Edwards MBE 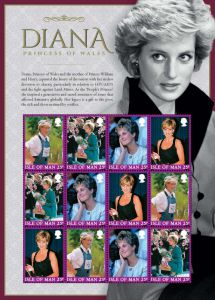 The sheetlet and presentation album feature photographs by Arthur Edwards MBE. As a royal photographer for many years, he travelled with the Royal Family and saw first-hand her tireless devotion to charity. He is famous for many of the iconic photographs we all remember so well. His personal reflection on her life and good deeds is a ringing tribute to a Lady, who became a Princess and then a legend, remembered in the hearts of the nation forever.

Arthur says: "Diana, Princess of Wales had the looks of a supermodel and the compassion of a nun. For 17 years I was lucky enough to travel the world photographing this remarkable woman. In that time, I witnessed her determination to make life better for the poor, the sick and those maimed in war zones. I was there when she removed the stigma of AIDS by embracing victims of this terrible virus. Diana used her royal status to improve lives. In Zimbabwe she helped feed hungry children and at home she visited youngsters in hospital. Her bravest undertaking was to help ban the use of land mines worldwide. I saw her comforting a dying child ripped apart by a mine in war-torn Angola. Twenty years have passed since she died but I'll never forget her."

In the same spirit of charity that Diana embodied, our presentation album focuses on the charities she supported with patronage. We have included the famous picture of Diana wearing the protective vest of the Halo Trust mine clearers; this amazing charity was a partner in the launch of #LandmineFree2025 at Kensington Palace earlier this year.

This beautiful postal tribute, composed of 12 of the reprinted 1998 stamps, is wonderfully presented in a presentation album packed full of images from Arthur Edwards MBE's archives. Complementing the images and sheetlet is affectionate issue text also written by the renowned photographer.

Diana, Princess of Wales, A Postal Tribute will be issued on Wednesday 6th September and is available to pre-order from www.iompost.com/princessofwales.