The Sun's legendary photographer has given the royal stamp of approval 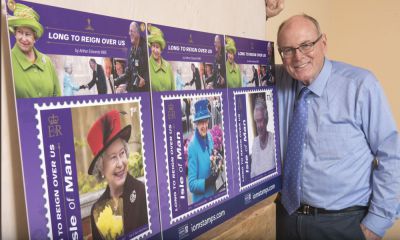 Eight photographs of the Queen, all taken by Arthur Edwards MBE, have been chosen for a set of stamps by the Isle of Man Post Office to mark her majesty's 90th birthday.

The stamps officially went on sale on Saturday (February 6), the 64th anniversary of the day Queen Elizabeth II came to the throne on the death of her father.

Each of the eight stunning pictures is a personal favourite of royal photographer Arthur who has spent 40 years travelling the world taking pictures of the Queen and her family for The Sun, Britain's biggest-selling newspaper.

The colour photographs make up a series of stamps titled 'Long To Reign Over Us' to commemorate the Queen's 90th birthday, on April 21.

Each stamp was personally approved by Her Majesty the Queen, Lord of Mann.

Aside from the stamps, there's also a first day cover, complete with an historic launch-date postmark – from the Isle of Man Post Office.

The stamps are included in a commemorative pack along with a photo Arthur took of Prince Charles kissing his mother's hand, as a host of stars look on, during the Queen's Diamond Jubilee concert in 2012.

Each pack also contains a special card in which Arthur explains why he chose these photos of the Queen and where they were taken.

Arthur, now 75, took his first photo of the Queen during the long, hot summer of 1976 and has continued to photograph her for the last four decades.

He says: "I have probably the best job in the world photographing the Queen and her amazing family. It's a great honour and an immense thrill to have my photographs showcased in such a prestigious way. I hope my images will give people as much pleasure as I had when taking them."

Arthur's photos for this unique stamp collection include portraits from the Queen's historic visit to Ireland in 2011, the most memorable of the 200 foreign tours he has covered, to a walkabout in Windsor High Street on Her Majesty's 80th birthday.

He was there last September on the Queen's historic tour of the Scottish Borders to mark another milestone, the day she became our longest reigning monarch.

Maxine Cannon, Isle of Man Stamps & Coins General Manager said: "I first met Arthur in 2003, when H M Queen Elizabeth and HRH The Duke of Edinburgh presided over our Tynwald Day ceremony. It was especially memorable as the late Sir Norman Wisdom was larking about and Arthur captured the moment perfectly, the photograph has been in our office ever since. We were thrilled when Arthur agreed to prepare an album of his favourite images for our 90th Birthday tribute."

Arthur, who became an MBE in 2003 for his services to newspapers, will attend UK Stampex – the premier stamp expo – at the Business Design Centre in Islington, London on February 17, from 2.00pm to 3.30pm to sign his stamps from stand 78 where Isle of Man Stamps & Coins along with, Gibraltar Stamps and Benhams will be situated.