Tribute to legendary artist Robin Gibb with the release of a limited edition of the album 50 St Catherine's Drive including CD, DVD and stamp set with a Certificate of Authenticity signed by Dwina Gibb 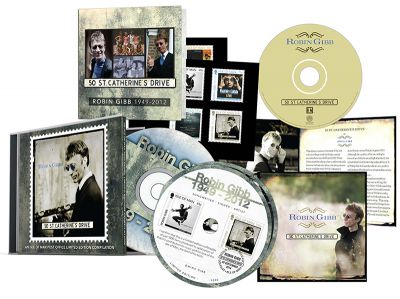 Isle of Man Post Office is honoured to present a limited edition collection that reflects on the legendary solo career of Robin Gibb CBE.

Released on September 29th, the 50 St Catherine's Drive album, named by Robin to commemorate his first home on the Isle of Man, features many of Robin's last compositions and recordings as a solo artist.

Isle of Man Post Office in partnership with Robin Gibb's widow, Dwina Gibb and Warner/Reprise Records, has released a unique collection that combines a CD of Robin's final solo album, 50 St Catherine's Drive, together with an Isle of Man Post Office limited edition DVD, a special booklet containing an extract from Robin's biography and a booklet containing a full set of Robin Gibb stamps. This special limited edition of 1000 also contains an insert signed by Dwina Gibb and postmarked with a special silver foil cancellation for September 29th 2014. Everything is contained beautifully within a CD jewel case.

The product is a stunning tribute to Robin's career and life, rendered with high quality photography and design that is beautifully brought together into a commemorative package.  Limited to just 1000 copies it is a truly unique collectible item that you will not find anywhere else.

The product retails at £22.50 and the Gibb family has requested that royalties from this exclusive product are to be donated to Rebecca House. Robin took a great interest in the Island throughout his life and indeed forged a special relationship with local charity Rebecca House that he opened with Dwina in 2008.

50 St Catherine's Drive is of great significance in that it was the former home of the Gibb family in Douglas, Isle of Man. In April 2013 the address was recognised by Douglas Borough Council as the childhood home of Robin Gibb and his brothers, and was commemorated with a blue plaque on the front door.

Dwina Gibb said: "Robin-John and I are delighted that the Isle of Man Post Office is releasing this wonderful special edition of Robin's final solo album. Robin always loved the Isle of Man and he would have been especially pleased with this commemorative album, DVD and stamp package produced in the place of his birth."

Maxine Cannon, General Manager of Isle of Man Stamps and Coins said: "Isle of Man Post Office is extremely proud to unveil this stunning tribute to Robin's life and career. Everyone on the Island is immensely proud that Robin called the Isle of Man his home. The Island was his birthplace with 50 St Catherine's Drive being his childhood home. We are pleased to take any opportunity to celebrate Robin's life and music."

To secure your exclusive limited edition compilation order at iomstamps.com where the collectible is now available for purchas or visit out Regent Street Post Office in Douglas, Isle of Man.