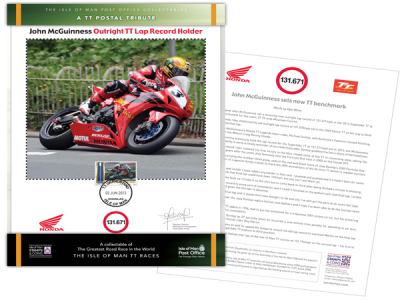 In a turnaround almost as fast as a TT racer, Isle of Man Post Office has released two new products celebrating the epic Dainese Superbike TT race, held on Sunday.

The first features Michael Dunlop, who dominated the six-lap race to take his first 'big bike' victory on the Honda TT Legends Superbike, 30 years after his late uncle Joey took his first TT win for Honda. The Post Office limited edition celebration sees a stunning photo of Michael in action on the Superbike accompanying a genuine piece of tarmac taken from the Mountain Course at the Ramsey Hairpin. Dunlop's domination has continued with victory in the opening Supersport race and the Superstock race, both held today. The incredible final lap by John McGuinness is celebrated in the second new product.After receiving a 60 second penalty for speeding in the pitlane, the Honda TT Legends racer produced the fastest-ever TT course lap, at an average speed of 131.671mph, to snatch back third place at the flag and beat his own outright lap record. It was a fitting end to a race in which he paid tribute to the great Joey Dunlop with replica helmet, leathers and livery evoking memories of the Honda Joey rode to his last 'big bike' TT win in 2000.

The Post Office has produced a print from the world-renowned TT portfolio of photographer Stephen Davison, incorporating a stamp from the 2009 Honda 50 years at the Isle of Man TT collection and a TT Grandstand postmark for June 2nd, 2013, the date of the race. Commentary on the reverse of the print is provided by motorsport journalist Kyle White. Measuring 210mm x 260mm, the portrait print is ideal for framing and essential for all TT fans.

Maxine Cannon, General Manager, Isle of Man Stamps & Coins, said: "The Superbike race was thrilling as Michael Dunlop took a superb win and John McGuinness showed his class to set a new outright lap record. "When John broke 130mph in 2007 we produced a commemorative product within a couple of hours of the historic event. The gasp of excitement around the course when John appeared in Joey Dunlop's 2000 livery helmet and leathers, plus smashing the outright lap record, made it a 'must do' to record the event for all collectors of TT memorabilia."