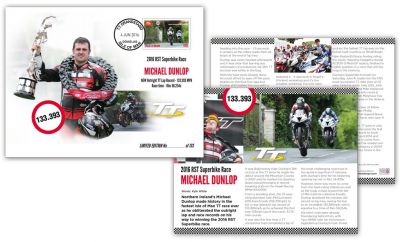 The Isle of Man Post Office has unveiled its celebration of the incredible new Isle of Man TT outright lap record, set by Michael Dunlop on Saturday.

It has released a limited edition special cover featuring pictures of the Ballymoney man in action captured by legendary road racing photographer Stephen Davison during the opening race of the 2016 TT, and the story of Dunlop's history-making lap written by respected racing journalist Kyle White.

Dunlop rewrote the record books during what proved to be the fastest-ever TT race, obliterating both the lap and race records on his way to 12th TT win.

Riding the Hawk Racing BMW S1000RR, 27-year-old Dunlop smashed the lap record from a standing start on the opening lap, with an outstanding average speed of 133.369mph. This not only shattered the previous benchmark, the 132.701mph set by John McGuinness last year, but was also the first time the legendary 37 ¾-mile TT Mountain course had been lapped in under 17 minutes (16 minutes 58.439 seconds).
But there was more to come; on lap two, despite slowing for the first pit stop, Dunlop went even faster, lapping at 133.393mph (16m 58.254s).

There was no stopping the Ulsterman as he rode to victory, completing the six-lap RST Superbike race in a record-breaking 1 hour 44 minutes 14.259 seconds – more than a minute faster than the previous record, held by Bruce Anstey. Amazingly, his average lap speed during the race was 130.306mph.

Maxine Cannon, General Manager, Isle of Man Stamps & Coins, said: 'It was a truly astonishing race which we had to join fans worldwide in celebrating. Michael Dunlop demolished the lap and race records, became the first rider ever to lap at more than 133mph and secured a 12th TT victory. It was an historic day which we are proud to mark with this very special cover, featuring stunning pictures from the race and the full story of how the six laps unfolded.

'Michael continues a proud family tradition of making history at the Isle of Man TT, following in the wheel tracks of his TT-winning dad Robert and uncle Joey. He's only 27 now, so who knows how many more records he will break.'

She added: 'In honour of the first 133mph lap, we have limited this collectable to just 133 individually numbered examples. They will be in great demand and will be flying off the shelves quicker than Michael Dunlop off the TT startline!'

The special cover, priced £17.50, can be ordered now from www.iomstamps.com, the TT Postshops at the Grandstand and in Regent Street, Douglas, or at any Post Office. You can also call 01624 698430 or email stamps@iompost.com.