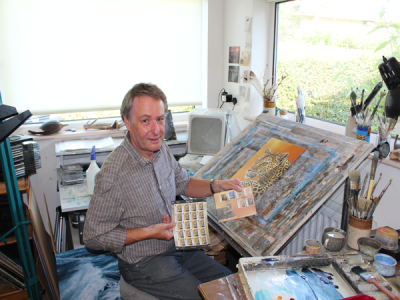 As Dr Jeremy Paul celebrates 25 years as a professional full-time wildlife artist, Isle of Man Post Office features his latest paintings as the subject of a new stamp issue.

Jeremy Paul is renowned around the globe for his talents as a wildlife artist and is based on the Isle of Man. In his career he has painted birds to polar bears, seals to baboons and one of his most recent projects showcase 'Big Cats.' The new stamps feature some of the most characteristic species of cat – the tiger, lion, leopard, jaguar, snow leopard and cheetah. All are in danger mostly due to habitat loss, poaching and persecution. Most now inhabit a tiny fraction of their original range and many are confined to national parks and reserves.

The commentary to support the illustrations has been written by Jeremy and not only provides background information about each animal, but also a personal account of his experience with them whether it be in their natural habitat or a reserve.

The release of the Big Cats stamp issue (September 13) ties in with the opening of Jeremy's new exhibition at the Manx Museum in the Isle of Man. The exhibition, which will run until January next year, will feature approximately 35 paintings that have previously been unseen, some of which Jeremy has been working on for the past year as well as some from his earlier career as an artist.

Jeremy's artwork is also featured on a new miniature sheet of stamps 'A Journey through Africa' which depict his pictures inspired by his trips to Tanzania, Zambia, Namibia and Botswana to name but a few. It also marks the 40th anniversary of CITES – the Convention on International Trade in Endangered Species of Wild Fauna and Flora. CITES regulates international trade in close to 35,000 species of plants and animals, including timber and aquatic species, to ensure that such trade is legal, sustainable and traceable. This miniature sheet is due for release on the same day (September 13) and adds to this wonderful new collection of stamps by the talented Jeremy Paul.

Dr Jeremy said: "When you see your artwork on a stamp it gives me such an enormous thrill. It's fantastic to see and a real honour. I never dreamed that my paintings would feature on stamps and I know many artists are so envious of this opportunity. With stamp issues I have done in the past I get contacted by people from all over the world asking for a signed first day cover – it's just wonderful."