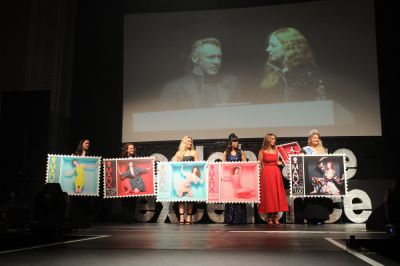 The 'Preen by Thornton Bregazzi' set of six stamps will be launched on the 1st February 2018 to coincide with London Fashion Week and are available to pre-order from today (Friday). The stamps depict landmark designs from the 20-year career of two of the Isle of Man's most talented and successful individuals, fashion designers Justin Thornton and Thea Bregazzi. The Manx-born pair, who received the Lifetime Achievement Award last night, are the principals of global fashion house Preen, which has grown to become a globally loved brand stocked across five continents and an industry insider favourite. Depicted on the stamps are Preen by Thornton Bregazzi's most iconic dress designs:
• First class value - features the red Finella dress that was famously worn by the Duchess of Cambridge, which was also featured at the Awards for Excellence evening
• Europe value - the citrus power dress that Amy Winehouse and Gwyneth Paltrow wore and became Preen's most popular dress of all time
• £1 value - the quilted florals from their most recent Autumn/Winter 2017 collection which was greeted by rave reviews
• Rest of world value - the pink velvet hitch dress from their Autumn/Winter 2016 collection which personified the season
• £1.57 value - the stripe Flintoff dress that was on the cover of British Vogue magazine and a massively successful dress
• £1.86 value - the pink silk wrap dress from their ground breaking Spring/Summer 2006 collection
The stamps will be connected more broadly to promoting a sense of national pride and the value that people can gain from living and working on the Isle of Man. The 'Preen by Thornton Bregazzi' stamp issue will recognise that growing up on an Island within a small community, often affords opportunities that cannot be found in larger towns and cities and for Justin and Thea, it allowed them to do just that. They are thrilled to be having their treasured designs featured on Manx stamps.

Justin said: "The Isle of Man is a unique place. It has inspired us throughout our career, it is in our heart and our soul. We draw on the colours and the raw beauty of the Island, the diversity of the landscape and memories from our childhood have been a great inspiration. From the fishing boats and the lobster pots, to the colours of the promenade, to the sea and the changing seasons. The Pagan history and the Celtic symbols have been a great source for us to draw on and we often incorporate them in prints and designs."

He continued: "When you don't live on the Island, your thoughts and memories become so precious and really expand and inspire your creative design process. Every visit to the Island brings new ideas and reminds us of so many memories, it's a special place and we love to bring our children to experience the joy and history of the Manx heritage."

Over the course of their career, Justin and Thea's designs have been worn by an array of high profile women across the globe including the Duchess of Cambridge, Diane Kruger, Scarlett Johansson, Cate Blanchett, Carey Mulligan, Beyoncé, Rhianna and Michelle Obama. The couple recognise the Isle of Man for design inspiration as well as having accounted for the diversity of their clients to ultimately create a mark of excellence in the fashion field.

Maxine Cannon, General Manager of Isle of Man Stamps & Coins said: "We are delighted to be working with Justin and Thea who personify the greatness that the Isle of Man can achieve. We are so lucky to have a rich heritage of talent and skill that has been home-grown on Isle of Man soil and then flourished further afield with the links to the Island never lost. This new stamp issue has been in the pipeline for some time and launching the stamps during London Fashion Week in February will no doubt heighten the Isle of Man's successful identity, and lead to a variety of exciting opportunities with Preen by Thornton Bregazzi for Isle of Man Post Office next year."
Lisa Duckworth, Interim Chief Executive, of Isle of Man Post Office said: "I wish to congratulate Justin and Thea on their lifetime achievement award. We at Isle of Man Post Office are thrilled to be working with them in what I am sure will be a well-received stamp issue across the globe."

To be the first to hear exclusive updates on this collaboration, make sure you sign up to our Front Row mailing list by clicking here. Make sure you put Preen in the subject line and your name in the body of the email and we will be in touch in due course.