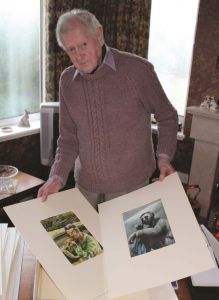 The Post Office has joined up with local artist, fellow of the Royal Photographic Society and WW2 veteran, Port Erin based James Fenton to commemorate the 70th Anniversary of VE and VJ Day with a miniature sheet. The sheet produced in support of the Royal British Legion is due for release on February 26.

VE and VJ Day mark key events in WW2. VE Day commemorates the end of the war with Germany on Tuesday May 8, 1945 and VJ Day, the day that Japan surrendered to the allies following almost six years of war on August 16, 1945. Both were momentous occasions for celebration and remembrance throughout allied territory including the Isle of Man which played a vital strategic role.

The miniature sheet is divided into two sections; one part contains stamps to mark the 70th Anniversary commemorations of VJ Day while the other honours VE Day. The image used for VE Day is a photograph from the Press Association showing a woman celebrating the announcement of victory. James Fenton has provided his artworks for the VJ Day stamps and is perfectly positioned to produce these designs having served as a gunner and then as a bombardier with the Royal Artillery in Burma. The magnificent portfolio of artistic works from James' service years depicts his experiences with striking style. His collection of pencil sketches, oil paintings, water colours, ink cartoons, photographs and models are a fascinating record and many feature alongside letters to his family to form the basis of his book 'The forgotten army'.

Some of the finest examples of James' artwork feature in this Isle of Man Post Office miniature sheet including a portrait of a Gurkha, (who in 2015 celebrate 200 years of service to the British Crown) the Burma Star and a soldier at war.

The VE Day stamps are also accompanied by a fascinating and in-depth narrative provided by Colonel Charles Wilson (retd) war veteran on the close of WW2 and subsequent final moments of the war in Europe with details of rejoice and remembrance across the Isle of Man, while a description of how the defeat of Japan in Burma lead to victory on VJ Day has been provided by Major General (retd) Sir Laurence New CB CBE Patron of the Burma Star Association Isle of Man.

Dr Robert Lyman FRHistS, also gives a tribute to British Commander, Field Marshall Viscount Bill Slim who in 2011 was voted joint winner of the accolade 'Britain's Great General', largely for his role of leading the Allied forces to victory in Burma with his 'Forgotten Army'.

Commenting on the miniature sheet, James Fenton said: "It's tremendous that the Isle of Man Post Office is marking the 70th Anniversary of VE and VJ Day and I am pleased to be a part of this significant commemoration. The miniature sheet looks stunning with a nicely balanced design and use of colour. I am sure the stamps will be received as a fitting tribute to the occasion."

Maxine Cannon, Stamps & Coins General Manager said: "We are pleased to mark this important moment in history with a lasting tribute to the first days in Britain's post war history following the fighting years. Mr Fenton's artwork which features on the stamps in its various media captures a side of war rarely seen in a memorable way. We are very pleased to again support the Royal British Legion with this sheet."