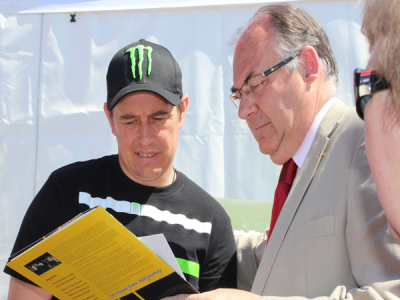 The racers who have dominated the opening of the 2013 Isle of Man TT have given their stamp of approval to two special products from the Isle of Man Post Office commemorating their incredible performances.

Honda TT Legends racers John McGuinness and Michael Dunlop met Isle of Man Post Office Chairman Geoff Corkish MBE MLC and Isle of Man Stamps and Coins General Manager Maxine Cannon at the TT Grandstand on Tuesday during a break from racing to have their first glimpse of the new products.

One is a portrait print measuring 210mm x 260mm which celebrates the outright lap record set by John on the final lap of Sunday's Dainese Superbike race. Although he missed out on the win, John took some consolation from increasing the record to 131.671mph. The print features a photo of John in the race by Stephen Davison, with the Joey Dunlop tribute helmet, leathers and livery, a stamp from the 2009 Honda 50 years at the Isle of Man TT collection and a TT Grandstand postmark of June 2nd, 2013, the date of the race. Commentary on the reverse of the print is provided by motorsport journalist Kyle White.

The second product is a genuine piece of tarmac taken from the Mountain Course at the Ramsey Hairpin accompanied by a photo of Michael Dunlop on his way to a dominant victory in Sunday's Superbike race. It was his first 'big bike' TT win and the start of an amazing TT which continued on Monday with wins in both the Supersport and Superstock races. Just 750 pieces will be available.

"During the Superbike race I made a mistake in the pit stop, that was my fault, so the absolute lap record was a bit of a consolation. But I'm proud to have done it, especially in the Joey Dunlop colours, and I would have been really disappointed if I'd got nothing out of it.

"When you win, your name goes on the trophy and that can never be taken away. Lap records aren't the same, because someone else could take them away. I've held the outright lap record here for many years, and while it's the wins I'm after, I'm always proud to be the fastest and I'm delighted the Post Office has commemorated my lap on Sunday like this, so it has gone down in history."

Mr Corkish presented two pieces of Michael Dunlop Ramsey Hairpin tarmac at the Grandstand; piece number 1 to Honda and piece number 6 to Michael, recognising the race number he carried in the Superbike race.

"Everything has been going good, the results have been coming and everyone has been really good to me. It's always nice to be recognised for what you are doing out there, so I'm really pleased my Superbike win has been marked like this."

John and Michael are both due back in action as racing continues at the TT on June 5.

"Sunday's Superbike race was filled with drama, and after watching Michael storm to victory and John smash the lap record in the way he did, we felt we simply had to commemorate the incredible performances of both. I'm delighted John and Michael were able to find time today in what must be a truly hectic schedule to join us in launching these two important new products, which I know TT fans and collectors all over the globe will want."