Scooter Enthusiasts Given the Stamp of Approval 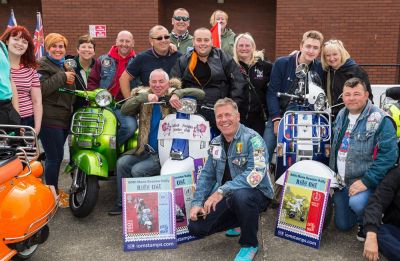 On Saturday 23rd June 2018, 600 scooters set off from the Grandstand in Douglas as part of the Isle of Man International Scooter Rally. The ride out was officially started by 1968 Scooter Rally gold medal winner Terry Moore and Anthea Radcliffe, former scooter girl and wife of Ken Radcliffe who started the Rally with David Higgins in 1958.

This event has an interesting history; initially conceived as an annual event featuring competitive racing, but in the 1980s, a ban was placed on scooters visiting the Island after trouble in the UK. In the early 2000's the rally was revived as a bi-annual social event, drawing crowds of scooterists of all ages.

In celebration of this landmark anniversary, Isle of Man Post Office issued a set of eight vibrant stamps featuring standout moments from the history of the gathering in May. To commemorate the ride out, the Post Office have issued a special cover with stamps cancelled using a grandstand postmark with Saturday's date. Sixty first day covers were also taken on the ride out which will then be sold, with a portion of the funds being donated to a local charity. 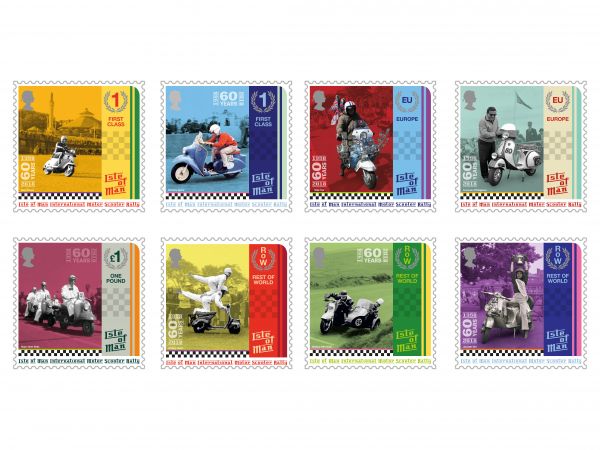 The ride out was part of a weekend of events which also included events at the Villa Marina where Julie Edge MHK, Chairman of Isle of Man Post Office, presented Barry Turner, organiser of the Rally, with a framed set of the Isle of Man International Scooter Rally stamps.

Julie Edge MHK, Chairman of Isle of Man Post Office, said, "International scootering and its links with the Isle of Man go back more than half a century and has played a key role in Manx tourism. It's been wonderful to be able to issue this collection as a celebration and tribute to the achievements of each of these popular racers, teams and iconic machines, but to the fascinating history of the event."

Tony Eckersley of the Salford Knights Scooter Club, who features on the red EU stamp said, 'This is my fourth time at the Isle of Man Scooter Rally, it's a great scene and the people are so friendly. To hear that there iss a stamp issue celebrating the event was impressive and to say I feature on one of them makes me very proud'.