In celebration of this historic occasion, we present this new collection

This new collection of eight stamps celebrates the Platinum Jubilee of Her Majesty Queen Elizabeth II, the first British monarch to reach this milestone.

We are pleased to announce that a proportion of proceeds from this collection will be donated to the Queen's Green Canopy initiative. 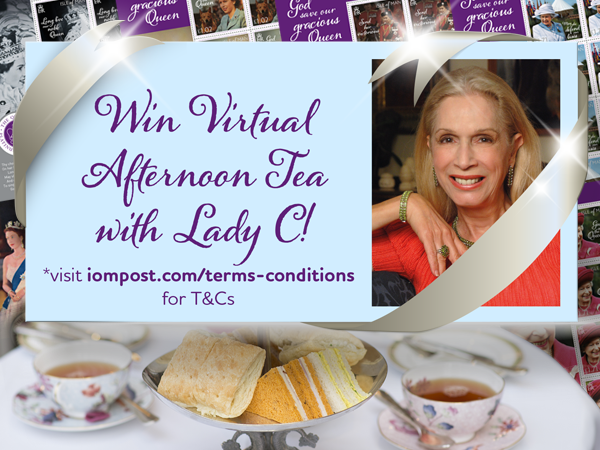 Simply spend £30, including one item from ‘Her Majesty Queen Elizabeth II - 70th Anniversary of the Accession to the Throne’ collection.

2022 marks the momentous occasion of the Platinum Jubilee of the reign of Her Majesty Queen Elizabeth II, the first British Monarch to reach this milestone, and in celebration of this historic event, Isle of Man Post Office is pleased to present a set of eight beautiful new stamps.

During the creation of these stamps, we wanted to convey the nation’s appreciation for the service Her Majesty has given so graciously and generously. Therefore at the forefront of the designs is the national anthem, God Save the Queen, which is referenced upon the designs and within the stamp borders.

We were pleased to work once more with Lady Colin Campbell, who wrote the issue text for the 2021 Devoted To Your Service royal collection. Lady Colin Campbell, who is known to the British public by the moniker “Lady C” since her acclaimed stint on I'm A Celebrity....Get Me Out of Here, has again written the issue text for this collection. Lady C states “I feel very honoured to have been asked to provide the words which accompany the stamps commemorating our beloved Queen’s Platinum Jubilee… The Queen's reign has both been long and momentous, her accession in 1952 taking place in the mid-point of a century which had started in the horse and buggy age and would end after space travel, the creation of the internet and the digital age were firmly established as everyday occurrences. It is a testament to the steadfastness, integrity and flexibility of The Queen that she has, throughout these massive changes, managed to remain both relevant and the embodiment of all that is good in society as a whole.”

This issue is the perfect collectable to celebrate this momentous occasion, order yours now and join us in marking a lifetime of achievement for our beloved monarch.

We are pleased to be donating a proportion of proceeds from this issue to the Queen's Green Canopy initiative.

These stamps celebrate the broad range of historical events and moments since Her Majesty’s Accession in 1952.

Stamp 1 – H M Queen Elizabeth II by Sterling Henry Nahum Baron in 1953. A friend of Prince Philip, he was appointed a court photographer to the British royal family and provided the official photographs of the Coronation.

Stamp 2 – Pictured by HV McKay Massey Harris, a portrait of Queen Elizabeth II on the day of her coronation on 2nd June 1953.

Stamp 3 – A countryside image of Her Majesty taken during 1953.

Stamp 4 – An image taken at the Trooping of the Colour during HM Queen Elizabeth's Silver Jubilee, 1977.

Stamp 5 – The image of HM holding the Union Jack. Taken during her Diamond Jubilee tour to Leeds, West Yorkshire and walkabout 12th July 2012.

Stamp 6 – HM Queen Elizabeth II lays a wreath at the Cenotaph in London during the annual Service of Remembrance to commemorate those who lost their lives in service of their nation and Commonwealth.

Stamp 7 – A visit enjoyed by thousands, HM Queen Elizabeth II, Lord of Mann visits the Isle of Man on Tynwald Day in 2003. After presiding over the Tynwald Day ceremony, representatives of the Isle Of Man Post Office were delighted to present Her Majesty with an album of our Golden Jubilee postal collections.

Stamp 8 – An image of Her Majesty in cerise/raspberry. Taken on her walkabout outside Lincoln Cathedral, 20th April 2000, after attending the Royal Maundy ceremony.

We wish to thank Lady Colin Campbell for providing commentary in celebration of Her Majesty’s Platinum Jubilee and royal photographer Paul Ratcliffe who has kindly supplied two images for use in this set of stamps. Finally, we wish to thank Her Majesty the Queen for 70 years of devotion to the throne and her people.

** Please note, products will be dispatched as and when available - please see individual products for issue dates ** 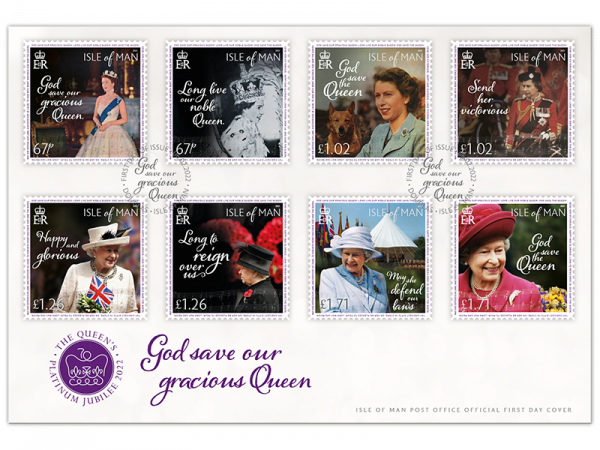 All eight stamps from the collection are presented here on a neutral backdrop, highlighting the classic images on show on each stamp of Her Majesty. The stamps are cancelled with a unique first day of issue postmark. 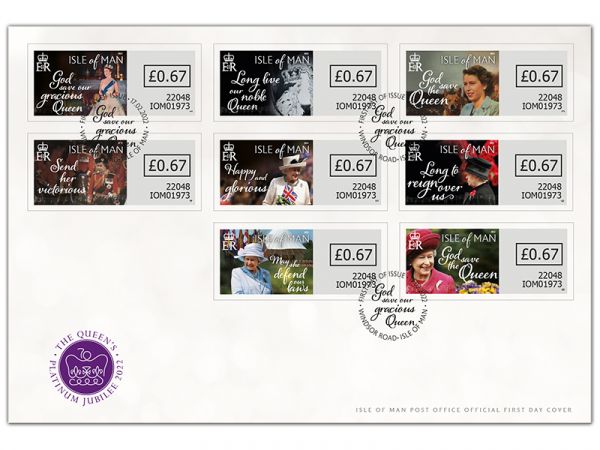 All eight designs from the collection are presented here on self-adhesive labels on a neutral backdrop, highlighting the classic images on show on each stamp of Her Majesty. The stamps are cancelled with a unique first day of issue postmark.