In this winter themed stamp issue, Isle of Man Post Office shares local artwork by Julia Ashby Smyth; a Manx illustrator who is at the heart of the Island’s art scene with her distinctively Manx / Celtic illustrations.

The stamp designs share instantly recognisable Manx wintery locations. The features around the perimeter of the stamps extends outside of the framed border. The Celtic font continues a strong Manx identity throughout the set.

These watercolours have been inspired by Manx winters, specifically snowfall, whether it be pending, during or after. Sometimes momentarily glimpsed from the cosy interior of a moving vehicle, or more often from merely stepping outside, woolly-hatted and frosty-breathed, just enjoying the colours.

Julia describes in her own words, the locations featured;

Laxey Wheel – Sometimes a winter sky is so intensely blue that it defies its season. A wintery walk to the far side of the Laxey Wheel on such a day revealed every detail in sharp clarity, from the redness of the flags to the yellowness of the flowering gorse.

Ballabeg Stop - A sprinkling of snow and a festively festooned station is incredibly atmospheric, steam and smoke pluming great clouds into a lilac sky, the giggly excitement of Christmas palpable in the air.

Sulby Methodist Church – You can drive past a building regularly without really noticing it. Surround it with snow, and suddenly it takes centre stage. A late afternoon petrol blue sky counterpointed the slate, bringing out the golden tones in the stonework. Low light, along with the buttery glow from the stained glass windows created a delicious warmth. Starlings and sparrows vied for prime roosts in the bright variegated holly tree, their songs, beeps and twitterings filled the air.

Onchan Church Hall - Walking up a snowy Royal Avenue on the way to post some Christmas cards gave the perfect opportunity to appreciate the architecture of Baillie Scott’s Onchan Church Hall, the lights within radiating through the red hearts in the windows, a welcoming glow spilling out through the open door. Designed by architect Ballie Scott, the Hall marks its 125th anniversary in 2022.

Groudle – Taking a walk through Groudle Glen on a fresh bright winter morning, the snow had dusted the rocks and paths creating a pristine canvas on which to drop and criss-cross sharp edged azure shadows. These along with the icy cold silvers and greys of the stream brought an atmosphere of an arctic wonderland.

Agneash – Whilst living up in Agneash we were snowed in for two weeks. The only way to get supplies was to walk down to Laxey. The advantage of this was being able to watch the whole valley, including the smoke from chimneys and the bare bushes, turn ever deeper shades of pink as the sun dipped.

“I am delighted and honoured that these watercolours have been chosen for the new 'Winter' issue. Inspired by captured moments, most often whilst out walking, bundled up in layers of wool, the cold air nipping at my nose, these scenes bring back many happy memories. The Agneash image, for instance, was painted after a very happy day sledging down snowy slopes. I walked home through an entirely golden pink landscape, even the seagulls were pink. Winter light is exquisite, creating spectacular colours, deeply hued shadows and extraordinarily beautiful skies." - Julia Ashby Smyth 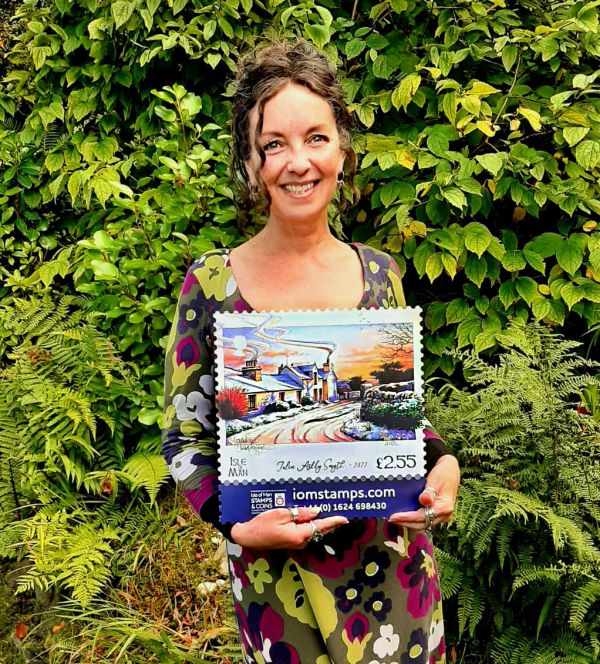 Julia is a freelance illustrator living and working amongst the trees on the edge of a mossy Manx Glen. Predominantly her commissioned work is book illustrations: from Children’s books and fairy tales to wildlife, fauna and historical buildings.

Graphite and ink are Julia's favourite mediums, but she is equally happy working in watercolour and coloured pencils. Julia loves detail, with much of her work being quite intricate, telling stories layer upon layer, throughout an image; her avid interest in the Manx landscape, its folklore, mythology and symbolism often permeating through to paper. 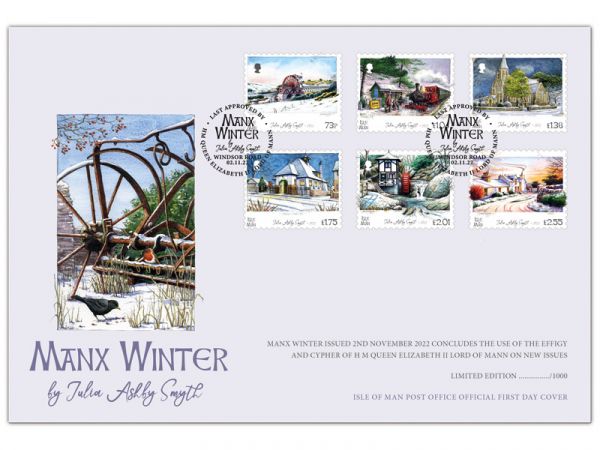 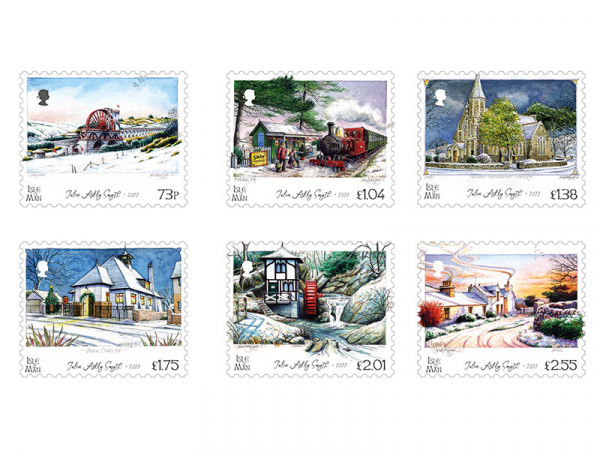 In this winter themed stamp issue, we share local artwork by Julia Ashby Smyth; a Manx illustrator who is at the heart of the Island’s art scene as curator of the Hodgson Loom Gallery at the Laxey Woollen Mills. Her distinctively Manx / Celtic illustrations are well known and much loved, appearing across the Island through many local commissions. 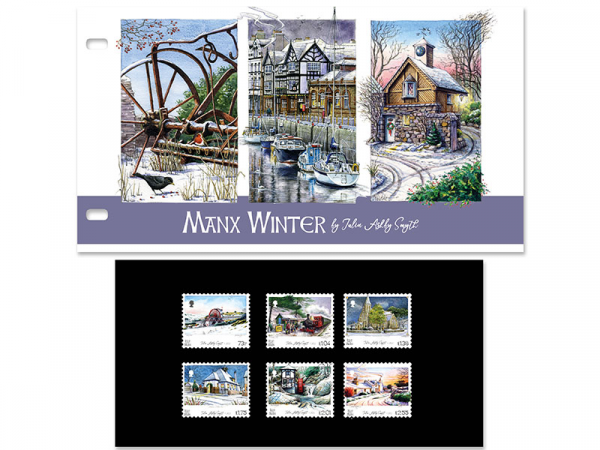 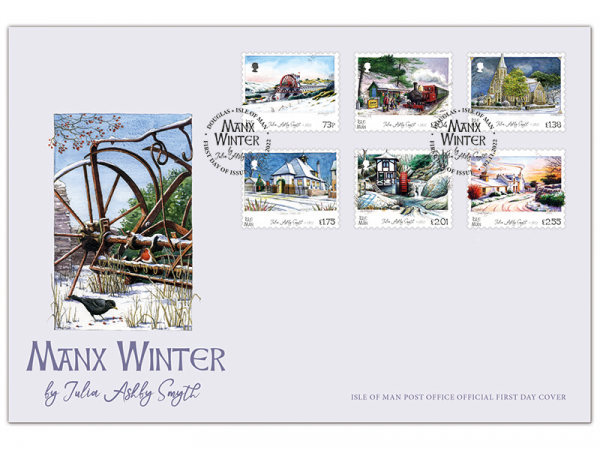 The six stamps featured on the front cover of this deluxe envelope are the final set to be approved by HM Queen Elizabeth II, Lord of Mann. 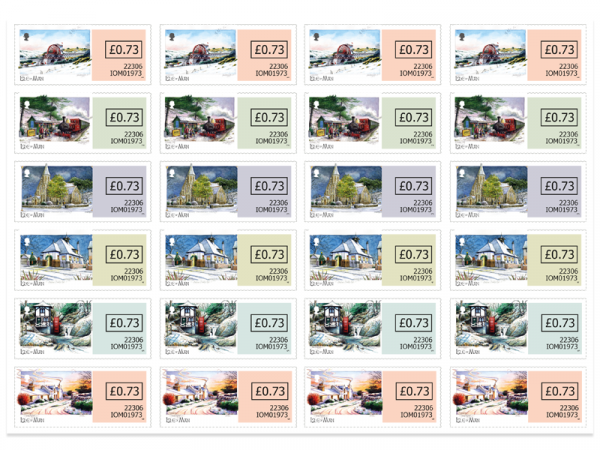 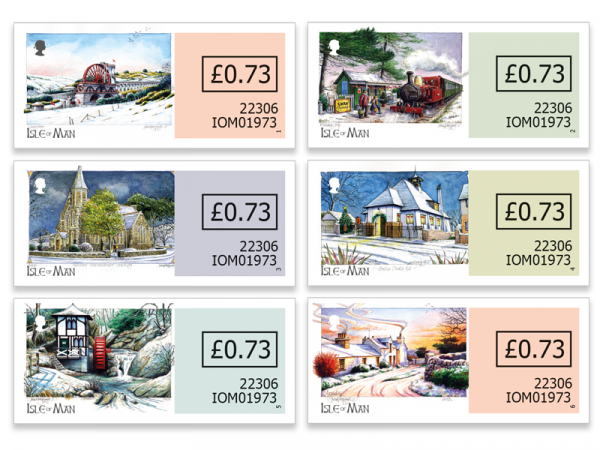 Our 2022 'Manx Winter' Christmas stamps will soon be available via our retail kiosks and post office counter network. Post your letters and cards by attaching one of these festive stamps and be sure to spread some good wishes this Christmas. 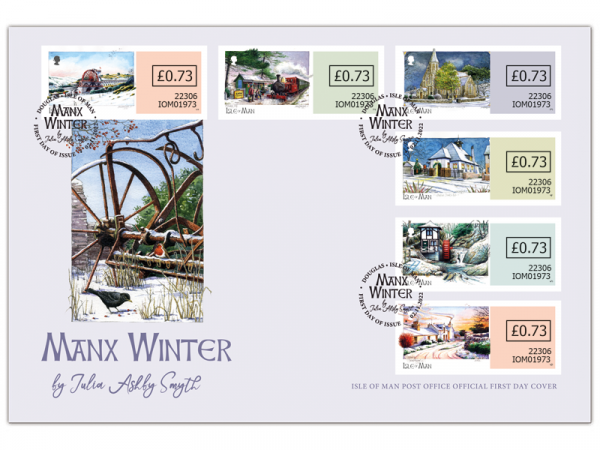 The full set of Manx Winter by Julia Ashby Smyth Self Adhesive stamps are displayed beautifully on this luxurious envelope. The set is cancelled with a special postmark for the date of issue - 2nd November 2022.